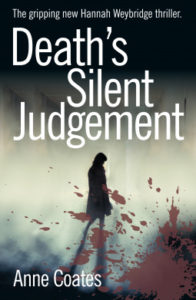 Today I’m VERY happy to have another victim, erm participant, in my ongoing 20 Questions feature – this time the rather lovely Anne Coates in celebration of her new novel Death’s Silent Judgement.

Dearest Anne, thank you so much for doing my 20 questions – let’s start with the books. 2nd one just out, how does that feel?

I can see you are leading me in gently, Liz, with your endearments – but I know that killer stare of yours! So having my second book, Death’s Silent Judgement, hot on the heels of Dancers in the Wind is simply brilliant. It’s been a “pinch me” few days.

Both books – and the third currently being written – are set in 1993/4. My protagonist, Hannah Weybridge, a single parent and freelance journalist, becomes embroiled in investigating the deaths of prostitutes in Dancers in the Wind, when a working girl she has interviewed turns up on her doorstep badly beaten up. Pimps and bent coppers are the least of her problems as she realises there is a much higher force pulling the strings.

In the sequel, Hannah discovers her best friend murdered in the church where she ran a dental clinic for the homeless. The police assume the perpetrator was one of her clients but Liz’s mother is unconvinced and employs Hannah to look into her death. As the investigation proceeds, Hannah has no idea whom she can trust – even people she thought she knew well.

Favourite type of cheese? (We MUST have the cheese question)

Really ripe Camembert takes me back to my time at Rouen University when the French in the student restaurants thought we were heathens for eating it. Delicious.

Don’t accept second best – in anything.

How much wine between us do you think we have downed at all the bookish events we pop along to? (Hey we are still standing, can’t be bad)

Too much for our own good but not enough to get us banned.

Let’s do the desert island question. You know, the one where you are stuck on a desert island and can only have 5 people for company, for no good reason whatsoever. Who would you choose and why?

This is where I suppose I should be outrageously entertaining but I’m probably a bit too practically-minded for that so first off I’d take the multi-talented Peter who’s been doing some work on my house. He comes from Poland and seems to be able to turn his hand to anything from accountancy to events management, plastering to plumbing and is a genuinely nice guy.

Number two top chef Marcus Wareing to cover the food side. I’m taking this too seriously aren’t I? Okay. Idris Elba just because… Sally Wainwright who with her brilliant writing and my final castaway, actor Sarah Lancashire, could keep us all entertained.

Sticking with the desert island theme – Desert Island discs. 3 songs or pieces of music you love to listen to.

Almost anything by Dusty – adore her. Last year at the Proms I heard Alban Gerhardt play Dvorak’s Cello Concerto in B minor and it has haunted me ever since. And Abba’s Dancing Queen to lift my mood at any time.

Who would you call to help you bury the body?

Well I did call my friend Geoff when my tortoise died. He’s a doctor and he brought along his stethoscope just to make sure. Then he dug a REALLY DEEP hole because, as he said, someone who lived here after me might inadvertently dig up the shell… I might have to bribe him heavily (or kill him afterwards) to inter anything other than a pet but I know the body would be buried deep.

Something that irrationally irritates you

Well I wouldn’t say this is irrational (irrational? Moi?) but I am irritated by people running late for meetings whether business or social. You’d have to have a very good reason to appease me for your lack of punctuality.

Last thing that made you laugh out loud.

Parts of the film Their Finest. Bill Nighy is fabulous in it. It makes you laugh out loud one minute then has you surreptitiously wiping away a tear the next.

Last book you read that you wanted to make everyone else read.

That has to be Sealskin by Sue Bristow. Beautifully written and perfectly plotted. I absolutely loved it.

Tell us a little bit about the NEXT book.

Probably about halfway though the first draft and as yet have no title but it is the third in the Hannah Weybridge series. Time has moved on a few months and life seems to be on a more even keel for Hannah. Then seemingly unrelated events and people draw her into a new web of murder and subterfuge.

Who publishes you and do you love your publisher? (Its fine nobody else reads these you know…)

Urbane Publications, one of the independent publishers who are moving the goal posts. Matthew Smith, who founded the company, believes in collaboration with the author. He “joked” at my first launch that that meant I told him what I wanted and he did it. Is that love?

Do we enjoy wine, books, crime authors and good company? Bit of a daft question Liz! It’s a winning combination.

I currently have three cats glaring at me. Alice arrived as a kitten and became a teenage mother. I kept two of the kittens who are now both double the size of their parent. Not so much fun as when they were cute kittens but always ready to compete for space on my lap. (Feline pride restored, I think.)

Rocking Party or night in with tea and a book?

Can I have both on alternate nights (but without the tea as I loathe it)?

Last television series you were addicted to.

Department Q. Only three episodes on BBC4 but utterly brilliant not to mention violent and gory.

Plotter and planner or seat of the pants writing?

Oh definitely a seat of the pants writer. As a journalist I am used to tight deadlines and writing when you may not be in the mood or are uninspired by the subject. This nicely seeps into my fiction (not that I am uninspired by my own writing you understand). I love taking an idea, a scene or a character and just letting it run. I never know how the book is going to end until I write it and then there’s every chance that I’ll change my mind in a later draft.

Surprisingly less than I thought I would. And I’m still looking forward to our drinks at Crimefest!

Thanks Anne. Me too!

Following the deadly events of Dancers in the Wind, freelance journalist and single mother Hannah Weybridge is thrown into the heart of a horrific murder investigation when a friend, Liz Rayman, is found with her throat slashed at her dental practice. With few clues to the apparently motiveless crime Hannah throws herself into discovering the reason for her friend s brutal murder, and is determined to unmask the killer. But before long Hannah’s investigations place her in mortal danger, her hunt for the truth placing her in the path of a remorseless killer…