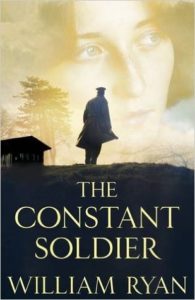 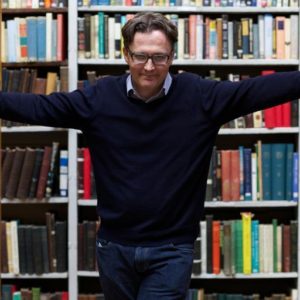 Next participant and very brave author facing the 20 Questions today- that would be William Ryan, who funnily enough will be appearing at First Monday Crime on the 3rd October and you could get yourself a ticket and come along if you like. It’ll be a great night they always are. He is likely to be much more sensible at that point. Probably. We’ll see. Also appearing – Stuart Neville, S J Watson and Antonia Hodgson – so don’t miss out.

And huge thanks to the inevitably brilliant Mr Ryan for agreeing to this.

The Constant Soldier is your latest sacrifice to the Gods of the reading masses – Fairly sure I’ve already told everyone in the world about it but just in case I missed Bob from Brighton, could you tell us a little about the background?

The Constant Soldier is based on an album of photographs taken at a rest hut for the officers and men who worked at Auschwitz. The photographs were taken towards the end of 1944 and at the beginning of 1945, at a time when the war was lost and the Germans were preparing for the arrival of the Red Army. It’s about an injured soldier, Paul Brandt, who returns from the war to find a fictional version of the hut built close to where he grew up – and someone he knew working there as a prisoner. The Constant Soldier is about what he does next.

Having done the book question we can get onto the important stuff. Biscuits. Now I have random cravings for Custard Creams and Bourbons – what is your biscuit of choice?

I like ginger nuts. Although I’m always confused by their not actually containing any nuts.

If you could choose one piece of technology to blast off the face of the earth never to be invented again what would it be and why?

One book to rule them all…

Too difficult! And whatever answer I gave today would be different tomorrow.

Number of times you are likely to swear in a week and do you get told off about it?

I don’t know – not as much as I used to. Having a six year old with an expanding vocabulary wandering around the house tends to put a stop to it. But, it has to be admitted, all bets are off when I’m in the car.

Are you a focused practical writer or an emotionally charged procrastinator?

Somewhere in between. What frustrates me, sometimes, is that a lot of being a writer involves not writing. It’s not exactly procrastination as having to constantly remind myself to focus on what I’m meant to be doing and not the stuff that isn’t essential.

I like a nice, tangy goat cheese. I persuade myself it’s healthy when I eat it with red grapes.

If you were having a Crime Writer dinner party which 5 would you invite and why?

Stav Sherez, because he’s so passionate about what he reads (and he’s read so much). James Ellroy, because, aside from being a wonderful writer, he’s a controversialist and that will keep things moving along. Raymond Chandler because – well – who wouldn’t? The small fact that he died in 1959 can surely be overlooked this once. Sharon Bolton, because I think she’s quite mischievous and would give Ellroy a run for his money. And Belinda Bauer who aside from being a lovely person is also a brilliant writer – I may well go over all fan-boy.

Hmm – I think it would be a toss up between Belinda and Sharon. If you’ve read their novels, you’ll know why. Tricky customers …

You have another series of books out there (Of which I still have the latest to go) Historical Crime I think is the accurate description if we must put things in a genre box – tell us a bit about that. Yes we will actually plug the books a bit in this…

The Captain Korolev novels are set in 1930s Moscow – where truth, justice and morality were all pretty flexible concepts. I suspect Korolev’s investigating murders to the best of his abilities is, in its own way, an act of resistance. Not that he sees it that way. He’s quite loyal to the Revolution – and I think the novels are about him trying to stay true to himself and what he thinks Communism should be about. The Soviet Union was a pretty fascinating place and Korolev, I hope, is an engaging guide to some of its eccentricities, as well as its darker side. Does that work as a plug? I’m not sure

Last thing that made you mad as hell…and did you have a good rant.

There was a referendum recently. I may have occasionally shaken my head in disappointment.

I get distracted very easily which leads me to being very forgetful. Basically I’m thinking about something else while I’m typing this. It makes life difficult.

Perhaps we should mention First Monday Crime somewhere in here – you are on the next panel and it’s your brainchild (with others ) – what inspired you all to start these evenings?

I was chatting to David Headley from Goldsboro and we both thought London needed a great crime writing festival, but that anyone trying to pull that off would have to build the audience first. So First Monday is a bunch of us trying to do just that. Our pitch was “a crime writing festival in an evening” and it does kind of work that way. We put some great writers on a stage and let them chat about books and then everyone goes to the bar. We’re moving to a great new venue – The Library on St Martins Lane – which actually has a bar in the same room as the event. So I think we may be on the right track.

Girls Aloud’s Love Machine, Nirvana’s Smells like Teen Spirit and Dallas by The Flatlanders. Make of that what you will.

The last film you watched and did you enjoy it?

Toy Story 3 – I’ve probably watched it about 40 times with my son. I did enjoy it. I think it’s a work of genius, in fact.

Which writer would you like to lock in a basement so you could steal all their work and pretend you wrote it yourself. (if that was something you would EVER consider which of course you would not)

Martin Cruz Smith. If he ever goes missing, I would like to point out that I don’t have a basement.

He’ll probably be in the attic instead.

If you were stuck in the wilderness (yes everyone has to answer this one in some form or another) which survival skill do you possess which would prevent you from dying within a few hours?

I have a passable sense of direction. But, let’s face it, most writers would be toast in the wilderness. Our sedentary lifestyle doesn’t bode well for fighting off predators.

Last thing that made you laugh…

Boris Johnson being made Foreign Minister. There, you see, it made me laugh again.

How many times do you reckon you’ve told people where your ideas come from by now…and are you at the point of insanity yet?

I never get asked where my ideas come from. Ever. I wish someone would – just once.

Is that the time? Must dash. See you later and thanks!

Gosh who knew he could run so fast?

About The Constant Soldier.

The pain woke him up. He was grateful for it. The train had stopped and somewhere, up above them, the drone of aircraft engines filled the night sky. He could almost remember her smile . . . It must be the morphine . . . He had managed not to think about her for months now.

And, in a forest to the east, a young female Soviet tank driver awaits her orders to advance . .

Read my review of The Constant Soldier HERE

And you could find out more about things here 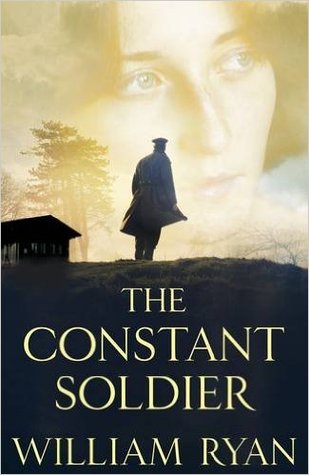