50 Years of Valley of the Dolls 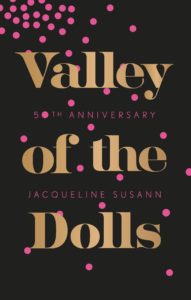 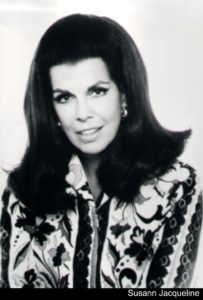 Dolls: red or black; capsules or tablets; washed down with vodka or swallowed straight—for Anne, Neely, and Jennifer, it doesn’t matter, as long as the pill bottle is within easy reach. These three women become best friends when they are young and struggling in New York City and then climb to the top of the entertainment industry—only to find that there is no place left to go but down—into the Valley of the Dolls.

Very happy to join in the nostalgic love for this novel – one I read in my teens and reread recently for this tour – because it is coming up on 50 years since it was originally published and is one of those rite of passage books that many many read as teenagers and beyond.

A classic one might say – and for good reason. First published in the 60’s it is kind of ageless. Rereading it recently I was struck by how it is actually not terribly well written and yet somehow holds you enthralled. A rags to riches to rags tale full of not particularly nice people doing not particularly nice things a lot of the time. The author wrote it with a kind of gleeful exuberance not worrying too much about nitty gritty but banging out an authentic and addictive story of 3 women, used and then abused by the entertainment industry, shining a spotlight on the things that hide below the glamour. A cautionary tale and one that has just as strong message today as it did 50 years ago.

I was struck by different things reading it now rather than back when I was young and stupid. I’m now not young but probably still as stupid in a lot of ways but lets gloss over that fact a bit like the characters gloss over how they are actually being treated in the novel – now I’m looking at it through different eyes I see how intense and in places hard hitting it is. More understanding of the issues that Ms Susan brought into the light, it has a pretty dark vibe going on. I can see why it caused such a stir when originally published although these days nobody is going to bat an eyelid.

Valley of the Dolls is superbly entertaining. It speaks to a moment in time that is entirely fascinating and feels surpisingly modern. If you missed out on this particular book you might want to give it a go.

You can purchase Valley of the Dolls HERE