A Little Taste of Fear….

You’ll never be out of Harm’s way

The young girl who causes the fatal car crash disappears from the scene.

A runaway who doesn’t want to be found, she only wants to go home.

To the one man who understands her.

Just as he gives shelter to the other lost girls who live in his house.

He’s the head of her new family.

DI Marnie Rome has faced many dangerous criminals but she has never come up against a man like Harm. She thinks that she knows families, their secrets and their fault lines. But as she begins investigating the girl’s disappearance nothing can prepare her for what she’s about to face.

Because when Harm’s family is threatened, everything tastes like fear…

Whilst we are way too early for me to write up a full review of Tastes Like Fear – the 3rd book to feature DI Marnie Rome, a character once met, never forgotton – it seemed reasonable to post a few thoughts on it and if you continue down I’ll give you a little reminder of what came before (no spoilers). If you have not read these and are a fan of the crime genre, then hey look, you’ve got a couple of months to catch up and my default position when it comes to Sarah Hilary these days is “Read, read now”

Tastes Like Fear is a bit of a triumph. Sublime writing with a socially cutting edge, DI Marnie Rome speaks to the hidden fears in all of us – she allows us to delve into the hidden darkness within society and see what is right in front of our eyes yet mostly only ever seen out of the corner of them – bringing a sharp focus to genuine issues whilst telling an entertaining, addictive and cleverly twisted story.

Its not the easiest thing to pull off, but Sarah Hilary makes it LOOK easy – with a sensitive eye to the emotional details, a fascinating character study in multiple layers and well to be honest just a darned good yarn that will have you up until the early hours bleary eyed and quite possibly tearful. If you let it settle into your subconcious too much it is truly terrifying. This is scary. The scariest thing about it is how likely it is. That is Marnie Rome in a nutshell.

Where did it begin? Well right here… 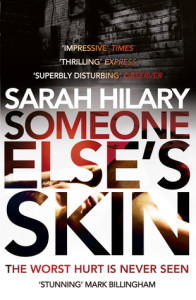 Winner of the 2015 Theakston’s Crime Novel of the Year

Called to a woman’s refuge to take a routine witness statement, DI Marnie Rome instead walks in on an attempted murder.
Trying to uncover the truth from layers of secrets, Marnie finds herself confronting her own demons.
Because she, of all people, knows that it can be those closest to us we should fear the most . . .

Read an interview with Sarah and what I said about “Someone Elses Skin” here: 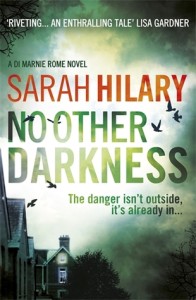 Two young boys.
Trapped underground in a bunker.
Unable to understand why they are there.
Desperate for someone to find them.
Slowly realising that no-one will…

Five years later, the boys’ bodies are found and the most difficult case of DI Marnie Rome’s career begins.

Her only focus is the boys. She has to find out who they are and what happened to them.

For Marnie, there is no other darkness than this…

One Response to A Little Taste of Fear….