A Tiding of Magpies. Guest post from Peter Sutton. 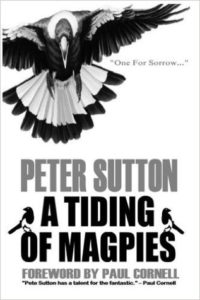 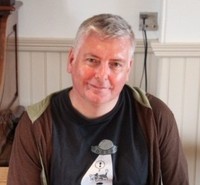 Very happy to welcome Peter Sutton to the blog today with a guest post on writing. Thanks so much Peter!

Writers like constraints and borders, rules and deadlines, word counts and themes. Well I do anyway. I was at an event recently where an editor was talking about an anthology he’d put together. He told the audience that he’d given the writers the loosest of briefs and for some this was liberating, for others, terrifying. I fall more in the second category than the first I think. My first collection of stories – A Tiding of Magpies – comes out on the 28th June. The stories were written over a three year period and themed upon the counting magpies song – One for sorrow…

Each story is inspired by a particular line. I never set out to write a themed collection. I was writing stories to prompts, either online or for anthologies . I wrote a story for Visual Verse called Waymarker which was inspired by a picture. In it a serial killer is named – “The seventh magpie”, I liked the image and the name and used it again in a fantasy setting – Tales for the Ferryman – for Far Horizons Magazine.

Sometime later I had to write a flash for a reading and I revisited the concept of “A secret never to be told” and wrote a story called Roadkill (published in The Speculative Book) which tells of a small boy obsessed by roadkill, and with the counting song.

It wasn’t until I wrote a third story – Thunder and Magpies – that I decided that I was writing to a theme. Again and again my mind came circling back to it. I realised that unconsciously my other work prior had also featured birds – An Unexpected Return, which won the Hodderscape dodo story competition, featured dodos of course, and my first published story – Artifice Perdu – (published in Airship Shape) featured pigeons.

And once I’d realised I had a theme I could riff off it. I could use the constraints as inspirations. I could put my stories in conversation with each other.

Where I live there are often magpies and their strange clacking song is an accompaniment to my writing. And they have snuck into my storytelling consciousness now and I wonder if they’ll ever leave.

A lot of my stories feature child protagonists, or narrators. Many are ambiguous with the possibility of the supernatural and many feature death. Maybe the playful nature of magpies, and the childhood TV show lend them a reason to feature. Maybe it’s their psychopomp nature?

As I said, birds feature in my short work (and in both the novels I have written too, just not so centrally). So is it a constraint or a freedom to write with that in mind? Not every story features birds of course, so there is freedom. But when I am given an open writing brief my mind circles back to the feathered kind. Thus , for example, when responding to a call for submissions for After Lines; for an exploration of – “the before, the after, and the un-spoken in fairytales, myths, and legends.” My mind naturally turned to a fairytale with lots of birds in it and I wrote Swan, Wild a sequel to Wild Swans by Hans Christian Andersen.

But is that constraint done with now that the collection is coming out? I don’t know. Maybe. I have spent most of this year working on a novel – Sick City Syndrome – which hopefully will be coming out towards the end of the year. I haven’t written may short stories so far this year. The last I wrote – Twelfth Night – did have birds in it, and psychopomps and creatively interpreted the brief I was given, to write a ghost tale. There was a constraint, a clear brief, a ghost tale taking place on a significant date, that became much looser as I wrote. But, if the brief had been – write whatever you like – would I ever have come up with that story? I doubt it.

He is a contributor to the Naked Guide to Bristol and you can read his latest published story – – The Detectives Tale – https://www.smashwords.com/books/view/637833

Pete’s books A Tiding of Magpies and Sick City Syndrome will be released by Kensington Gore in 2016 – for details see: http://www.kensingtongorepublishing.com/

This ‘Deliciously Dark’ collection of stories written by Pete Sutton, tells tales themed on the counting magpies song – “One for sorrow… “

A Tiding of Magpies is an enchanting short story collection which will give you a pleasurable shiver up the spine. Whether it is waking up to unmentionable sounds in Not Alone, or taking a trip to the land of stories in Five for Silver, the surprising use of a robot butler in I, Butler or competition winners It Falls and An Unexpected Return, these thirty one tales, ranging from tiny flash fiction to long stories of several thousand words, always entertain, even when they unnerve. These darkly fantastical tales have been published in anthologies and magazines or written especially and collected here for the first time by Kensington Gore Publishing.

“Pete Sutton has a talent for the fantastic.” – Paul Cornell (Shadow Police series, This Damned Band, Doctor Who, Elementary)

“…there is a sweet and subtle music to Sutton’s stories. They take you to strange places.” – Mike Carey (Lucifer, The Unwritten, The Girl with all the Gifts, Fellside)