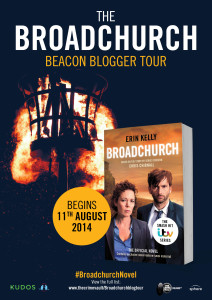 Welcome to my stop on the Broadchurch  Beacon Blog Tour – whilst excitement is rising for series 2, the talented Erin Kelly took on the mantle of putting into literary form the addictive, highly popular tv show and boy did she do it justice and then some so….let me remind you what I told you when I said…

Right, so, the UK tv sensation of 2013 completely passed me by. Oblivious was I, having watched 10 minutes of the opening episode, then getting distracted by a book or possibly even by chocolate. Luckily I also managed to avoid any and all spoilers, so for me, apart from the fact that there was a body on the beach, I knew nothing.

When I found out that the novel version was to be penned by the devilishly twisty mind of the lovely Erin Kelly I was literally chomping at the bit – for many reasons. Firstly because I adore her books anyway and secondly, being the only person on the planet who did NOT know who murdered Danny Latimer, I wondered if I could work it out. We’ll come back to that one. First lets look at the book overall.

This was a genuine page turner for me, haunting, evocative, looking at a small town coming apart at the seams after a most horrific event. As suspicion rises in all quarters, it was compelling stuff. Its probably good that I can’t make comparisons between the tv portrayal of David (swoon) Tennant and Olivia Coleman and the characterisation provided by Ms Kelly here of Alec Hardy and Ellie Miller, but both of those characters came to life in my head, as did every single one of the others. Emotionally speaking this was a shot straight through the heart – the grief bang in the centre of the Latimer family is brought into stark contrast by the police investigation going on around them – I did often have a tear in my eye especially when Danny’s mum Beth was having her darker moments, alone and in pain.

So yep, packing a definite emotional punch, one that I can’t imagine will be outdone by the viewing of it when I do that – I’ll move onto the heart of the mystery – just who DID kill Danny Latimer and why? Well according to many many people who I have spoken with, on the screen it was glaringly obvious. In the hands of Erin Kelly? Not so much. In fact I got it completely wrong. Utterly, I’m actually embarrassed that now she has had me twice on the twisty turny stuff, once with The Burning Air and now with Broadchurch. When I look back I realise that everything I needed to know was right there – what this author does so well is not hide the facts but make you look the other way. Misdirection. Cleverly done – especially since in this instance she was working from a story already told and to someone elses script. At which point I should say I am VERY much looking forward now to seeing Chris Chibnall’s vision of this story.

For now though I think that if you did watch the show, and loved it as many did, then this novel will absolutely enhance and expand that experience. Because for me, it would not have mattered one little bit if I had already known the culprit, the heart of this novel is not in the whodunnit, but in the emotionally charged atmosphere of the people and place involved. In a community where everybody knows everybody else and there is nowhere to hide, still Broadchurch has many  devastating secrets buried just below the surface. And as brilliant as ALL the actors who took part in the show surely are, you cannot see what they are thinking, feeling at depth or considering doing. That is where the novel will absolutely beat the visual medium I have no doubt. Because Erin Kelly can write characters straight out of real life and onto the page – in this case with a deft hand and an imaginative turn that will hold you gripped within the boundaries of Broadchurch for a good while.

UPDATE: I have now watched the Broadchurch television experience and boy that was absolutely perfect. I can honestly at this stage say that the book and the show compliment each other perfectly. My own recommendation is to read then watch if you are lucky enough to still have this to discover…