Code Name Verity by Elizabeth Wein. I am distraught. And in awe. 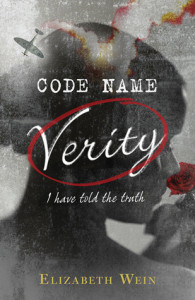 “I have two weeks. You’ll shoot me at the end no matter what I do.”

11th October 1943: A British spy plane crashes in Nazi-occupied France. Its pilot and passenger are best friends. One of the girls has a shot at survival, the other has lost the game before its barely begun.

Now I’ve finished crying into my pillow, perhaps I can try and review this book. I’ll do my best – but its one of those. Sometimes there are no words. But hey, its what I do so here we go…

“Verity”, a female spy, has been captured during one of her missions. Tortured, threatened and scared for her life she agrees to confess – given two weeks and paper and pen, she begins her tale – one of friendship, loyalty, heroism and betrayal – and of Maddie, the pilot who flew her into France and who she believes is dead.

Oh how her story creeps into your heart, so subtly and gently that you don’t realise she is there until its too late then you have to read on, to that oh so heartbreaking yet uplifting and authentic finale that you can see coming at you like a freight train but cannot fathom until it hits you. Hard. Right in the gut. Fiction yes. How much of it could be real? Every single word….

Verity and Maddie shine like beacons against the dark and forbidding backdrop of a world at war – a tale of two halves if you like, this one stomped all over my soul and left me wrung out and over emotional – anyone who has read and loved “The Book Thief” will know exactly what I’m feeling right now. It hasnt let go yet. No not yet.

Still, to be pragmatic. This is one of those novels that you want to make everyone read. And yet it won’t be for everyone – no book ever is. It may be aimed at the young adult market but it reads just as well if you come at it from an entirely adult point of view, and it is extraordinarly well written and compelling. If you are looking for a fluffy, light, chic lit type of read where everyone lives happily ever after then please leave this alone – if you want a read that will tear your heart from your chest and leave it feebly beating on the floor then I would pick this one up right now.