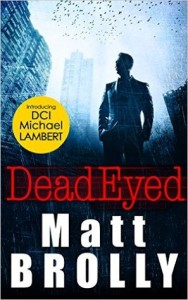 Today I am VERY pleased to welcome author Matt Brolly to tell us about how his first novel, Dead Eyed, came into being.

The idea for Dead Eyed came to me in 2008. I initially called it Souljacker, and the ‘soul-stealing’ element to the story was much more prominent. I set the story in a small seaside town, and the killer’s motive was tied into the history of the town’s church and small community.

I planned the whole story, and even submitted some opening chapters and a synopsis to the Debut Dagger Award. But for one reason or another, I stopped writing it and focused my energies on another project.

That project was a dystopian thriller which I finished and sent off to a select number of literary agents. I received some positive feedback, amongst the rejections, the most interesting of which came from an agent who commented that she thought my writing style was well suited to more ‘straight’ crime/thriller fiction. So, I decided to take another look at the Souljacker.

Although I liked certain aspects of the story, I couldn’t get interested in the piece as it stood. It had an air of the supernatural about it which I wanted to move away from. But I still liked the idea of the Souljacker. I sat down and started again from scratch.

Once I’d finished the new draft, nothing, save for the serial killer known as the Souljacker, remained from that original version. I changed the location, the main protagonists, and the victims. I even changed the Souljacker himself, giving him a completely different back story. Rather than have the Souljacker as a new case, I reactivated his killing spree after a twenty year hiatus. As I began writing the new main protagonist, Michael Lambert, I realised the book was really about his journey. The Souljacker started to take a back seat, as I explored Lambert’s past, and his motivation to investigate the killer.

Not much of that version exists now, either. The Souljacker stayed, as did Lambert, but the novel was far from complete. Something was missing from Lambert’s journey, and the investigation itself. Over the next few drafts I added a second protagonist, DI May, who had a different approach to investigating than Lambert. The two characters began playing off each other, until the story started going in a completely different direction. Another few drafts later, and I felt ready to send the MS into the big world.

After a few near misses, Dead Eyed was accepted for publication by Carina UK (Harlequin/Harper Collins) who were keen to develop the book into a series.

It seemed that my journey with Dead Eyed was over. I worked through my first draft of the second in the series, thinking that the major work on Dead Eyed was complete.

Then I received my first set of editorial feedback.

The story was structurally sound, but could I take a second look at certain areas? Perhaps I could dig deeper into Lambert’s background, develop the relationship between Lambert and May further? A few months later, and Dead Eyed was a different monster to the book initially submitted. Whilst tightening up certain areas, the editorial feedback had enabled me to propel the story into something different. The feedback was sound, and just what I needed to make the book the best it could be.

August 2015 and I received my copy edited Author Amendments Copy of Dead Eyed. Reading through, it was hard to equate the book I was reading not only with the first draft of years ago, but also to the version which was initially accepted by my publishers. Signing off, I was relieved, and a little sad, to say goodbye to the story.

However, I now have a rich and exciting direction for the series so although from a writing perspective, my work on Dead Eyed is finished, some of the characters live on. The second in the series, Dead Lucky, is due for publication before Christmas 2015, and I will shortly start work on Book Three.

Yet when he’s passed a file detailing a particularly gruesome murder, Michael knows that this is no ordinary killer at work.

The removal of the victim’s eyes and the Latin inscription carved into the chest is the chilling calling-card of the ‘soul jacker’: a cold-blooded murderer who struck close to Michael once before, twenty-five years ago.

Now the long-buried case is being re-opened, and Michael is determined to use his inside knowledge to finally bring the killer to justice. But as the body count rises, Michael realises that his own links to the victims could mean that he is next on the killer’s list…