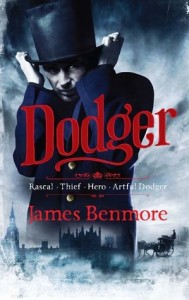 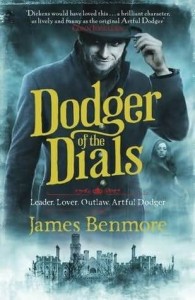 Today I am very happy to welcome James Benmore to the blog with a really interesting guest post all about Dodger and the Newgate novel.

Dodger of the Dials and the Newgate Novel

Imagine never having heard of Oliver Twist before. Better yet, imagine that you were one of that book’s first potential readers when it was published back in the late 1830’s. Everybody is talking about how gripping the story is but you’ve missed the first half because it’s serialised in a magazine called Bentley’s Miscellany along with a number of other running narratives and now you can’t get hold of any back issues. You’re heartily sick of hearing people going on about the Artful Dodger, Fagin and Bill Sikes – meaningless names to you but they seem to cause great excitement in the Bentley’s reader. And so you think OK – I’ll start in the middle. After all, you’ve read plenty of other novels. You’re bound to get the gist of things.

Lets say then that you enter the world of Twist around 100 pages before the end. You start at Chapter XLIII – Wherein is Shown how the Artful Dodger got into Trouble. This would be your first meeting with the infamous Jack Dawkins and there he is in front of the magistrate on trial for stealing a silver snuff-box and he’s every bit as irreverent, outrageous and as funny as you’ve been promised. Actually, you wonder, why isn’t Dodger the title character? This Oliver Twist person is barely in it. But Dodger is not the lead character and he’s promptly sentenced to Australia and never mentioned by the author again.

However, the rest of the book is also almost entirely concerned with the fates of the remaining criminals. Oliver Twist – who you now discover is a poor workhouse orphan but talks like he’s been educated at Eton – is in the clutches of a vile London gang and it is they who are driving the story forward not him. It is of course Oliver’s life and innocence that’s at stake but he’s a surprisingly passive participant in his own final act. He’s soon rescued by a prostitute – of course it doesn’t specifically say that Nancy’s a prostitute but you’re a worldly reader and you know what the author is getting at -who is subsequently murdered by the brutish Sikes. Sikes is then hounded to his death and that whole section of the story is focalised from his perspective which means that at this late stage a desperate murderer is getting more attention from the reader than the titular Oliver. Then the book ends with the lead villain Fagin being hung outside Newgate prison.

So, as you shut the magazine after having finished the final installment, you might reflect upon what a superior piece of crime fiction those last chapters really were. Indeed, you think as you pour yourself a well-earned brandy, that was probably the best example of a Newgate novel you’ve read yet.

The Newgate novel was a genre term used to describe a controversial yet vastly popular set of crime stories published throughout the 1830’s in which the villain was also the hero. They typically would often be set among the slums of the city and are populated with burglars, thieves and prostitutes just as those last 100 pages of Oliver Twist are and they too would often culminate with a charismatic crook finally facing the rope. Classic examples of this genre would be Edward Bulwer-Lytton’s Paul Clifford (1830) and Jack Sheppard (1839) by William Harrison Ainsworth. Paul Clifford concerns a fancy gentleman who leads a double life as a highwayman and is notorious for its turgid prose style. Jack Sheppard though is about the real life thief from the previous century who famously escaped from a condemned cell in Newgate prison before his execution in quite spectacular fashion, only to be captured again and hung some months later. It too was serialised in Bentley’s alongside Oliver Twist and both books shared the same illustrator George Cruikshank. So no wonder those early readers couldn’t see the difference between the two tales and considered Oliver Twist not to be a sacred text in English literature – as we tend to see it now – but as just the latest example in popular crime fiction for the masses.

Charles Dickens hated his novel being described as part of `the Newgate School’ however as he felt that his talent and growing reputation was being slandered through association with lesser authors. And, in all honesty, there is a lot that separates Oliver Twist from those other books, most notably that it is significantly better written and far more interested in modern social commentary than the usual Newgate period drama was. But despite that I can’t help but feel that Twist promises and delivers much of what genre fans would expect from such a book. Even the title is a tease as to what dark avenues the story will be going down. In Victorian slang to `twist’ meant to hang so many readers would have followed the story expecting it to be poor Oliver who would ultimately be taken to the gallows. So it seems that Dickens was courting the crime readership for all his protestations to the contrary and that Oliver Twist is indeed a Newgate novel. Just because it’s the best one by some distance does not mean that it doesn’t fit snugly within that genre.

In particular the Artful Dodger is a character that seems very at home within the dirty yet sensational world of Newgate fiction. So much so that I decided that I wanted the events of Dodger of the Dials – the second installment in my series of novels continuing the story of Jack Dawkins – to mirror the events of Jack Sheppard, the very novel that Dawkins shared the pages of Bentley’s Miscellany with. Like Sheppard, Dawkins is an irrepressible but likeable thief who gets into deep trouble when he begins allying himself with far more dangerous criminals who cannot be trusted. And like Sheppard he finds himself caught at last and thrown into the condemned cell at Newgate. Dodger has a small amount of time before he can escape from this medieval prison but, as a keen reader of Newgate fiction himself, he knows that if Sheppard could liberate himself from the hellish place then so can he. However, he soon discovers that people only write books about those criminal heroes who successfully leap from a high prison wall to the neighbouring houses without falling to their deaths in the street below. But there are countless more escapees who nobody wrote about and those are the kind that all went splat on the cobbles below. And in any case, even the most successful heroes of a Newgate novel eventually become unstuck in the end.

Unlike Charles Dickens I’m actually quite proud to call my book a Newgate novel. Because Dodger of the Dials is about a famous criminal hero set in a previous century and with a plot that revolves around the now demolished prison it has a lot in common with Jack Sheppard, even if the principal character does come from Oliver Twist. And I’d be extremely thrilled if my book delivers even a fraction of the excitement that the authors of the Newgate school – the famous as well as the forgotten – were capable of providing for their loyal readers. I even like to imagine that the Artful Dodger, a character associated with all that is great about English literature, could even be the one capable of bringing that now fairly obscure subgenre of the crime novel back to C21st bookshelves.