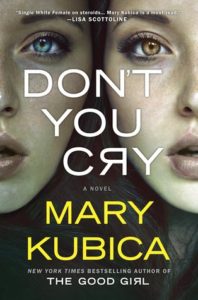 In downtown Chicago, a young woman named Esther Vaughan disappears from her apartment without a trace. A haunting letter addressed to My Dearest is found among her possessions, leaving her friend and roommate Quinn Collins to wonder where Esther is and whether or not she’s the person Quinn thought she knew.

Meanwhile, in a small Michigan harbor town an hour outside Chicago, a mysterious woman appears in the quiet coffee shop where eighteen-year-old Alex Gallo works as a dishwasher. He is immediately drawn to her charm and beauty, but what starts as an innocent crush quickly spirals into something far more dark and sinister than he ever expected.

I was a HUGE fan of Mary Kubica’s “The Good Girl” one of my favourite books of its year, not QUITE so fond of “Pretty Baby” even though it was still heads and shoulders above a lot of psychological thrillers, so Don’t You Cry was much anticipated. The fact that I banged through it like a grasshopper on acid probably tells you that I’m a big fan of this one too…

The two points of view work very well in tandem and Mary Kubica has such a gorgeous turn of phrase and ability to suck you in.  It really didn’t take long for me to be totally immersed in the problem of the missing Esther, the roommate she left behind and the mysterious girl wandering the streets of a small community inspiring a keen obsession in one of the residents.

The plot weaves a spell and twists and turns towards the ultimate resolution, which I won’t say anything about because obviously that would spoil things – but once again the author spins you around and uses pretty classic (and cool) misdirection to keep you on your toes. Meanwhile there are some great engaging characters and fascinating family dynamics that give a realistic edge to things and will keep you turning those pages.

The psychological thriller is definitely not dead. Not when authors like Mary Kubica can give such good book – whilst a lot of the standard tropes are in here they are often not recognisable as such, plus the prose is authentically atmospheric and intensely absorbing.

You can purchase “Dont You Cry” HERE