Focus: Bryant and May – The Burning Man. 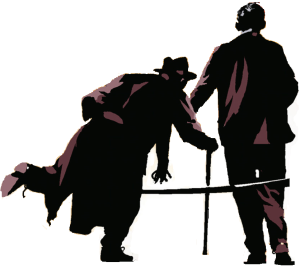 Today, to celebrate the 12th instalment in the brilliant Bryant & May series, I am very happy to welcome Christopher Fowler to the blog telling us “The Truth about Bryant and May”.

The Truth About Bryant & May

When the first Bryant & May book was written as a stand-alone novel for the publishers Little, Brown it was turned down. To be fair to them, they had supported an author who seemed unable to settle into any style or genre, who threw all their attempts to pigeonhole or create a fanbase. They had made some mistakes, publishing my novel ‘Calabash’ under sufferance and not really understanding it, but generally they were good publishers and nice people to work with.

Transworld immediately ‘got’ Bryant & May thanks to their editor, Simon Taylor, who saw a future in them that even I hadn’t foreseen. He suggested a sequel, not me. As the first book had originally started out as a period romp, I rewrote it to set the thing up as an origin story, and so the series was born. I planned to cap it at six books, with a story arc buried within the entirely separate plots that involved a man called Peter Jukes and a Ministry of Defence conspiracy to cover up a series of deaths. I’m not sure that my real-life author pal Peter Jukes has forgiven me yet.

The arc was based on a number of real incidents occurring at the time, involving the suicides of several Indian workers. This is from a site called Truthfall.com;

What is it about scientists working at Porton Down that make them want to commit suicide? Just recently, the body of Dr Richard Holmes, 48, was found in a field only 4 miles away, and in very similar circumstances to the now infamous “suicide” of UK weapons inspector to Iraq, Dr David Kelly back in 2003. Holmes too, was a weapons scientist working at the government’s secret chemical warfare laboratory, until he resigned a few weeks ago.

When I closed the arc of six tales in ‘The Victoria Vanishes’, we adopted a wait-and-see approach to the books, which were selling to a small group of dedicated fans but certainly not a threat to the big names in crime. WH Smith wouldn’t stock me (they still don’t – apparently they think the books are too upmarket) but specialist shops liked the series, and both Waterstones and Foyles proved loyal stockists. Most importantly, the publishers didn’t actively lose money on them, so on we went.

I started to trim down the history lessons within the books, which were getting a bit lengthy, and began enjoying myself with the subsidiary characters. The first cover had been created by a wonderful artist, Jake Rickwood, who was represented by Meiklejohn Illustration. Coincidentally, I had known Chris Meiklejohn for donkey’s years beforehand, and he could have been in a B&M novel. A darkly handsome man with one arm, he wore a sinister black glove on his false hand and personally repped his artists around ad agencies.

When we came to do a second book, Mr Rickwood announced that he was retiring – landing us with no artist to take the series on. The result was that we ended up with a disastrous attempt to recreate the first cover, which was scrapped in favour of an even more awful one which became known as the ‘Simpsons’ cover, because on it Bryant & May were bright yellow. We finally found the brilliant David Frankland, who instantly understood the semiotics required for the books; a hint of those old railway carriage posters, an Englishness, a balance of architecture and humans, a touch of darkness.

Suddenly I was up to volumes 9 and 10, and another story arc had formed in my head, this time involving the characters. I knew that Volume 12 would had to bring us full circle with a building on fire, and that with it I had to close something off. Over the books, one of the pleasures for me has been confounding readers who said ‘you can’t surely get any more out of this genre’ by proving that I could. What’s more, I found it relatively easy, compared to my stand-alone novels. Because by this time I realised I had created a weird sub-genre of my own, not as comfortable as ‘cosy’, fanciful but within the realms of possibility.

After all, the original concept had been rooted in hard fact, my scientist father having worked in just such a post-war unit. Still, I planned to end the series at Volume 12 because it was where the second arc finished, and I had an idea for new crime series. Even more excitingly, when I ran the idea for this new series past agents they nearly all hated it, which was enough to make me want to prove them wrong and make it work.

Once again my plans were rerouted, because writing ‘The Invisible Code’ provoked a sea-change in me. If you look at the books from that point you can see something has fundamentally altered; they’re more relaxed, they trust the reader, they have more confidence and lightness of touch. It really helped that my outgoing agent Mandy had intervened to remove a new character and make me set him aside for another time. She said; ‘Concentrate on what you’ve already got.’ It proved to be great advice.

Unlike my stand-alone novels, such as ‘Plastic’ and ‘Nyctophobia’, the Bryant & Mays feel as if they write themselves. I’d be lying if I denied they’re hard work to put together – they are – but I have far more confidence now. I knew that typing ‘The End’ would come as a terrible wrench on the twelfth volume, so I didn’t (you’re not allowed to look and see what I put instead unless you’ve first read it!)

Now we sail into darker waters…shortly I’ll be explaining how I’m going to deal with the situation I’ve created, and what else you can expect. 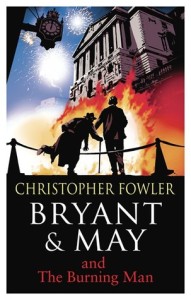 London is under siege. A banking scandal has filled the city with violent protests, and as the anger in the streets detonates, a young homeless man burns to death after being caught in the crossfire between rioters and the police.
But all is not as it seems; an opportunistic killer is using the chaos to exact revenge, but his intended victims are so mysteriously chosen that the Peculiar Crimes Unit is called in to find a way of stopping him.

Another outing for the Peculiar Crimes Unit then, featuring eclectic detective duo Bryant and May – I’ve always really enjoyed this weirdly wonderful series, I have dipped in an out of them over the years and it is always a pleasure.

This instalment throws a lot of problems into the path of our pair, most especially for Bryant, as usual the mystery they face is both strange and difficult to fathom. I’ve always been a big fan of the construction of these stories – intelligent plotting and a wonderful backdrop (London is the 3rd character here for sure) Christopher Fowler challenges and engages the reader every time, keeping you immersed into the narrative all the way.

I like that you can read any of these as standalone novels, yet the mythology of the series is still ingrained into every one. This one would be a great one to start with, it is definitely one of my favourites so far (although I need to go back and fill in the odd gap) it was beautifully done and an absolute page turner.

Plenty of twists and turns, an elegantly woven puzzle with a social edge, with “The Burning Man” Mr Fowler has shown that there is plenty of life left in this series despite, or perhaps because of, its longevity. Highly enjoyable, eminently readable and a perfect blend of crime and character driven storytelling. Highly Recommended.