From the very Beginning….Meet Amie. 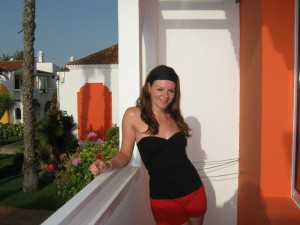 So today I want you to meet a lovely friend of mine, Amie Johnson. As well as being an amazing singer with her acoustic band “In Your Honour” and a teacher she is also attempting to embark on a writing career. Reviewing both books and bands she is already making a bit of a name for herself.  I’ve read bits and pieces of her preparation so far and I think she might write rather a good novel. As a blogger, reviewer and lover of all things books I thought it might be interesting, and something a bit different, to follow the writing process from initial decision to writing to (hopefully) success. Equally its possible that things may not go as planned. Either way lovely readers, we will be with Amie all the way, with updates over the months and for all the ups and downs that are to come.

So I will hand over to Amie – she will tell you about her idea, her decision to write and her process so far. Enjoy!

Amie – From the Beginning

However cliche this may sound, or however silly, the idea for my current book came to me in a dream…

I was on a summer holiday in Gran Canaria and I remember waking up, crying for my brother. I don’t think I’d drank many cocktails previous to me going to sleep! And within seconds the dream came flooding back to me in vivid detail. I knew at that moment it was something I wanted to write. I wanted to turn my dream into a written piece of art.

I don’t know how well my dream will translate on paper, if well at all, but I want to try, to make those tears seem worth while. To make them mean something more than just another nightmare.

NanoWrimo is what awakened a passion in me to write novels. At university, in my last, year I wrote a very “in-yer-face” script set around the theme of prostitutes and drugs. It was performed by my class mates on a large scale production – tickets were sold and everything – and it was a great success. So, after being challenged to the great NanoWriomo … -That is to write 50,000 words in 30 days – I decided I would turn my play into a street drama novel. Unfortunately, that year (2011) I did not achieve the full 50,000. So, I made it my goal to accomplish it for 2012. And, after many sleepless nights and anti-social days, I did. I wrote a chick-lit book titled ‘The Other Side’ and it was a very proud moment for me. It was about an actress who lead a perfect life in front of the camera, but behind the camera everything was going wrong. I would love to share this novel with you but due to my lack of backing documents up and my friends lack of computer skill (you know who you are!) I lost the whole novel. 50,000 words gone, vanished into a cyber space and never to be read again. Of course I had other, shall we say more experienced, people look to find it but alas, it wasn’t to be.

Now I want to avenge my story with another and this dream couldn’t have come at a better time – and don’t worry, I’ve learnt to back up my stuff!!

In the future, once a great war has settled and there are only two islands left, a new Government ‘The Regime’ is in play and with elections around the corner, there is a lot going on. Annie works for the local school helping people with disabilities to read and write. She is happily settled with her boyfriend who saved her from a, common, street attack. Her Father, after being recruited into the Regime’s army ‘The Crafters’, went missing and Annie’s Mother joined The Crafters as a communications officer in search of him. Annie’s brother works in a warehouse by day, but by night he is part of a much more life threatening group – ‘The Rebels’. They work against The Regime with hopes of one day performing an overthrow. Annie has a good friend in The Regime, Eman, who is favourite to win the election, but once he does, many of the dependents opinions change. Eman calls for a human cleanse, meaning anyone who, in his eyes, do not contribute enough to their society will be outcasted.

How badly will the cleanse affect Annie and her life?

Do the Rebel’s succeed in an overthrow?

Or will humankind be altered again?

When I started to write a plan it honestly just flowed. Every spare second I had on my holiday I was on my phone typing away, letting my imagination run wild, and it felt great. Once home, I typed it all up and printed out a chapter by chapter synopsis. Names for characters come easy to me and as I began writing the story, naturally the plot changed slightly. Two chapters would merge into one, things like that. The first ‘bump in the road’ I reached was names for things like the new Government and even now I am unsure of what to call my two remaining Islands. My first idea was to have ‘districts’ but this is becoming very popular in young adult novels and so I moved on from that, deciding I should create a name – so this is still a working progress.

So far I am on 6,314 words and am still thrilling over the idea of getting it all down. A lesson I have learnt on a writing course I am currently studying for is to write down your story, having planned each chapter, and then go back to each chapter and turn your drafted words into a masterpiece. Whether I have the skill to produce a masterpiece is another question! For me, I struggle with filling chapters. Most of mine are about 1,000 words which, when I think about your average book, should be more. Maybe once I have finished the big job of writing the book in its entirety, before going back to chop and change things, and on completion of my writing course, I will be able to master this technique better and produce lengthy chapters, after all practice makes perfect!

I did have a moment of weakness however, which i’m told is apparent in most writers careers. I lacked the confidence to continue, my characters stopped talking to me and I didn’t know where to take them. I know what I want to happen in my story but finding the words was proving difficult. My problem is I ramble on and although I have 1,000 words a chapter, it becomes too wordy. My style of writing at the moment is blogging, but it needs to be better. Say three lines in one sentence kind of thing. This is something I am now working on to advance at. Wish me luck!

And that brings you right up to date with my process. It’s a working one and no one is perfect, but I hope you have 1. learnt something 2. were excited by my book blurb and 3. look forward to my next entry here. That latter hope is a big one, I have to say, but please do.

With thanks to Liz, as always, an inspiration and influence to my passion. x

And her blog here: http://amielou89.blogspot.co.uk/

Thanks Amie. I look forward to hearing more….and reading more as we go!