Getting to Know You with Anthony M Brown: Death of an Actress Blog Tour 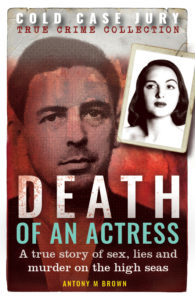 What is the Cold Case Jury Collection?

It’s a series of books about true crime mysteries. I’m interested in cold cases – historical, unsolved true crime – from the first half of the 20th century or earlier. My goal is to combine history with a real-life whodunit and take a different approach to writing true crime. It combines storytelling and analysis of the events and evidence. Readers are engaged directly, as if they were a juror. Indeed, they are invited to deliver their verdicts online (www.coldcasejury.com) on what they think might have happened. Readers become part of the case, helping to bring it some closure; this is what the Cold Case Jury Collection is all about.

Tell us a little about your current book, what readers can expect from it.

The second book, Death of an Actress, is the tragic case of Gay Gibson. In October 1947, a luxury liner steams across the equator off the coast of Africa. A beautiful actress disappears from her first-class cabin and a dashing deck steward is accused of her murder. Although the evidence against him appears damning, he vehemently protests his innocence. Using recently discovered police files, I tell the full story for the first time with new evidence, including statements from witnesses not called to trial. Was it murder, or does the new evidence point to a different verdict? I provide my view at the end of the book, but it is the view of the jury that counts.

Are there any scenes in the book that were difficult to write?

The steward claimed the actress died suddenly during sex, and a respected pathologist supported his view in court. This means there to be a sex scene in the book. Conscious of the Literary Review’s Bad Sex Award, I strenuously avoided using metaphors, as this seems to be the trap that catches out even good writers!

My entire childhood was spent happily in Winchester. A pleasant town, and apart from the political mugging of Boris Johnson when he stepped off the Vote Leave bus during the EU Referendum, nothing really exciting has happened there since it was the ancient capital of England. Family life was close and supportive, and still is. Many memories from childhood stay with you for life, so I think a happy childhood is important for the well-being of everyone.

Academic. Sounds so boring, I know. However, the two are not mutually exclusive. I would say that writing is a very creative enterprise pursued more by academic types.

To be a radio presenter, particularly a DJ on Radio One. But I believed it was not a proper job and fell into the very middle-class mistake of putting everything into studying at school and college. Then, when you graduate from university, you wonder, what can I really do now?

Yes. It was reading “1984” by George Orwell at school. I thought, “I want to write something so important that school kids have to read it!” In fact, Orwell remains one of my favourite authors. I am actually working on a novel at the moment, but I don’t think it will ever get taken into an English Literature lesson, let alone be part of the curriculum.

The unsung ones: the people battling difficult situations, caring for others, with no power but to make a small part of the world a little better, normally for someone else.

When I worked for IBM I ran a directing marketing campaign based on a ‘Mission Impossible’ theme. The deliverable was a brown envelope with “For Your Eyes Only” stamped on it. Unfortunately, it met all but one of the FBI’s guidelines for suspicious packages and led to the evacuation of an air base. This provided me a salutary lesson in marketing: air bases do not make good customers!

Definitely phone a friend. My prowess at all things practical was clearly demonstrated at secondary school. Last century, we did not do “tech” but “woodwork”. I clearly remember that we had to make a rack for 10 cassette tapes. After a few weeks of toil, the teacher inspected the finished articles. All my friends passed, snuggly fitting 10 cassettes into a beautiful wooden rack. Mine looked like a parallelogram and fitted only eight! See what I mean about childhood memories staying with you?

Although Britain is not the best place for it, a sun worshipper. I love hiking in the Alps and Dolomites during the summer months – definitely something not to be done at night.

Some of the Bill Bryson books – through laughter.

Pieces of life advice for everyone are called platitudes. If there is one thing most of us could do better it is probably listen more and say less.

Published in time for the 70th anniversary of one of the most dramatic trials in British criminal history.

DEATH OF AN ACTRESS is the second in the Cold Case Jury Collection, a unique series of true crime titles. Each case study tells the story of an unsolved crime, or one in which the verdict is open to doubt. Fresh evidence is presented and the reader is invited to deliver their own verdict.

October 1947. A luxury liner steams over the equator off the coast of West Africa and a beautiful actress disappears from her cabin. Suspicion falls on a dashing deck steward with a reputation for entering the cabins of female passengers. When the liner docks at Southampton, the steward is questioned by police. Protesting his innocence, he makes an astonishing admission that shocks everyone, and is charged with murder. His trial at the historic Great Hall in Winchester draws the world’s media. He is found guilty and sentenced to hang.

But was the verdict sound?

Now for the first time, Antony M. Brown has secured unprecedented access to the police file, enabling the definitive story to be told. Included in the file are original court exhibits, including a hairbrush with strands of the actress’s red hair. Could a personal effect left behind in her cabin provide clues to how she might have died? Take your seat on the Cold Case Jury… 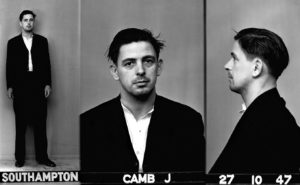 Above: Looking worse for wear this is the official police photograph of James Camb, the day after he was charged with the murder of Gay Gibson

Below: James Camb’s left palm print matched the one lifted from inside the door of Cabin 126 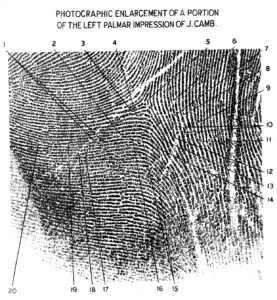 Death of an Actress is available now from Mirror Books and you can purchase it here.