Getting to Know You – with Kim Askew and Amy Helmes. 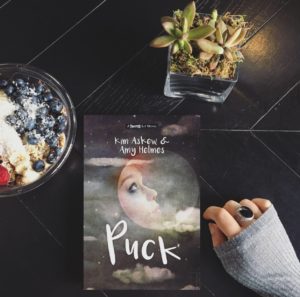 Today I’m VERY happy to welcome Kim and Amy, co-authors of “Puck” their latest “twisted lit” novel – more details after the interview. I have to say these sound great – different and fun – so I feel my toppling to be read pile may get a few additions before very long!

In keeping with our other “Twisted Lit” books, Puck was inspired by a Shakespeare play, in this instance, A Midsummer Night’s Dream. We loved the idea of these trouble-making fairies roaming a forest and creating havoc, so we opted to set our novel in a wilderness rehabilitation camp for juvenile delinquents. Our main character, Puck, lies, hates, and manipulates… but we think she’ll also steal your heart! 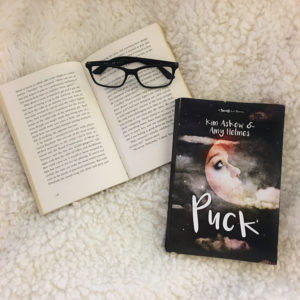 Kim: I was born in California, but my dad joined the Army when I was four, so my family also lived in Germany and Texas. The four of us (I have a younger sister) were a close-knit crew. I caught the travel bug and have lived in San Francisco, London, and Los Angeles as an adult.

Amy: I’m from Cincinnati, Ohio, where there were tons of aunts, uncles and cousins, most of whom lived within a few miles of us. It was a big leap for me to move to Los Angeles when I graduated from college. My parents made me sign a notarized contract stating I would eventually move back. I think they’re still waiting!

Kim: Both. I would read the literature textbooks in their entirety the first week of school, regularly earning the moniker of “teacher’s pet.” I always loved to write so I really enjoyed any chance to be creative in that way.

Amy: Creative, because I always tried to make every assignment fun. In high school, I wrote a rhyming, “Dr. Seuss” version of Lord of the Flies, and I also wrote a paper for a linguistics course in college analyzing language in Saturday Night Live’s “Wayne’s World.” 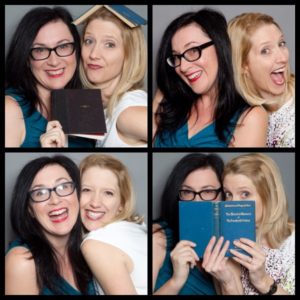 Kim: My first real job was in publishing, and that was a dream come true.

Amy: I wanted to be a teacher, and would often set up my own imaginary classroom in my bedroom, creating fake homework assignments and tests from the “children” that I could grade.

Kim: I wanted to be a writer from a very young age. During naptime I would compose epic poems and fairy tales.

Amy: I was in fourth grade, and my teacher singled me out, inviting me to read for the whole class a short story I’d written. That was the moment I realized I had a knack for this whole writing thing!

Kim: Actually, Amy is one of my heroes. She’s a cool mom, dedicated friend, incredibly clever, and somehow manages to carve out the time to write the Twisted Lit series with me. Also, my mom. She held our family together through our many moves, and even though we never had a lot of money growing up, she made sure that we had a really stable home life. Love you, Mom!

Amy: Anyone with the courage to stand up to a bully, be it Malala Yousafzai, Tiananmen Square’s “Tank Man,” or a school kid in the cafeteria.

Kim: As a child, I once performed one of my “epic poems”–this one about a unicorn–in a talent show. I was dressed in a fairy costume and held a wand that my dad had fashioned out of tin foil. I was painfully shy, so I started to cry midway through the performance and kept crying all the way through my recitation.

Amy: I was on a game show once called “Russian Roulette” where you had to stand on a trapdoor that would open when you got the answer wrong. I ended up making it to the final round, but went flying through the trapdoor when I didn’t know what the word “mendacious” meant.

Kim: I’m one of those annoyingly cheerful morning people.

Amy: Night owl. I go to bed early, but often wake up to work in the middle of the night.

Kim: I cried at the end of A Man Called Ove, and also recently shed tears re-reading our Puck manuscript. There’s a scene Amy wrote that always makes me bawl.

Amy: I recently read Charlotte’s Web to my kids, and I can’t even with that book.

Amy: A Hitchhiker’s Guide to the Galaxy. I read it while grounded once as a teenager, and it was seriously one of the most wildly entertaining nights of my life. Thanks, Mom!

One piece of life advice you give everyone.

Kim: If you do just one thing toward your goal every day, you’ll eventually get there. Focus on the small steps if the overall goal seems overwhelming.

Amy: You can’t control everything, but you can control how you react to situations, which is actually a bit of advice that made our way into this latest novel. Hope you check it out!

Thanks guys! It has been wonderful getting to know you! 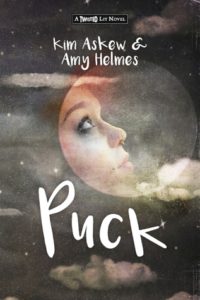 Life isn’t always fair, and no one knows that better than fifteen-year-old Puck. When she’s unceremoniously booted from yet another foster home, this city kid lands at DreamRoads, a rehabilitation wilderness camp. Her fellow juvenile delinquents include a famous pop star with a diva attitude, a geeky, “fish out of water” math whiz, and a surly gang-banger with a chip on his shoulder. The program’s steely director aims to break Puck, but she knows that every adult has a breaking point, too. Determined to defy this realm of agonizing nature hikes and soul-sucking psychobabble — even if that means manipulating four lovestruck camp counselors and the director’s dim-witted second-in-command — Puck ultimately gets much more than she bargains for in this “wondrous strange” outdoor odyssey inspired by Shakespeare’s “A Midsummer Night’s Dream.” 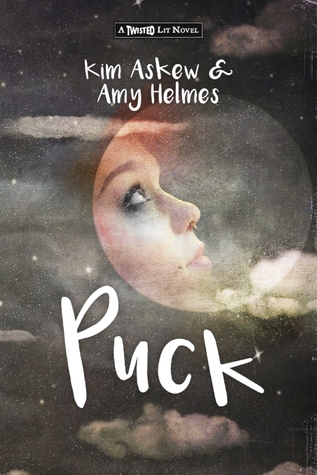