Getting to Know You with Louis Winslow: A Bundle of Colorful Yarns 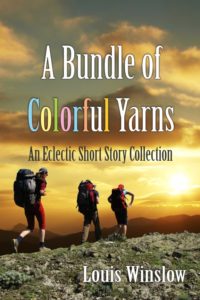 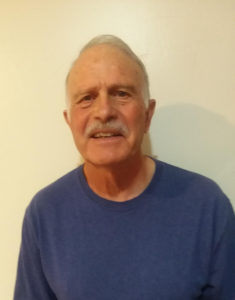 Today I am happy to welcome author Louis Winslow to Liz Loves Books telling us a little about himself and his short story collection “A Bundle of Colorful Yarns”. Thanks so much to him for taking part.

My current book, “A Bundle of Colorful Yarns” is a collection of short stories both nonfiction and fictional. Most of the tales can be described as outdoor adventures where the characters are presented with a problem they must solve. I attempt to be as realistic as possible although some are fantasies. In many I put in a twist to keep the reader interested and guessing. The nonfiction ones are experiences from my past that have influenced me in one way or another.

I grew up in Brownsville, Minnesota, a small rural community that is a Mark Twain type of town. My dad was a riverboat pilot and we lived on the Mississippi. I am seventy-six years-old, so we didn’t have any organized activities or television. We townies played softball in the warm months, swam in the river, played football in the fall, and had an on-going prisoners base game that took place all over the village. We also played Cowboys and Indians on the bluff that over looked Brownsville. Of course, most of the boys and some girls fished and hunted beginning at an early age. I started hunting squirrels when I was ten.

Our family could be described as competitive and quarrelsome. At the dinner table we argued a lot which we thought were discussions. When my wife visited our home for the first time she was appalled at what took place. In her home nobody ever spoke loudly or became upset.

I had a math major and chemistry minor in college and did well enough to be inducted into an honorary fraternity. I also had to take some general and elective classes. I enjoy history and took some courses. I very quickly learned that one could improve your grades by knowing what political beliefs the professor had. On tests if you wrote with a political bias that agreed with the instructor’s you were assured of a good grade. This worked in three of four classes but unfortunately, I never guessed Dr. Gilky’s political biases in his World History class. I enjoyed his class the most but also had to work the hardest.

The first job I really wanted to do was to be a high school math teacher after graduating in 1963. My wife has an elementary teaching degree and we managed to both get a job in Wallace, Idaho. I quickly became disillusioned. Even though I had some outstanding students I couldn’t control them. The next job I really wanted to do was being a product development chemist for 3M. I worked there for thirty-six years. The best part of the job was you were independent and were given the latitude to solve problems on your own.

I had to take an English composition class my freshman year of college. There were thirty students in the class and almost every week we had to write a short essay or story. The prof would read four or five of the writings that he enjoyed. Almost every week he chose mine to read. I never forgot that, and when I retired from 3M I started writing short stories and poems. My daughter-in-law also encouraged me to write. She is an excellent poet who I admire.

Who are your real-life heroes?

My heroes include Harry Truman, Alexander Hamilton, Martin Luther, Thomas Edison, the Wright brothers, George Washington, Charles Darwin, Madame Curie, and Chief Joseph. I admire people who are forceful, honest, creative, and whose activities have changed the world for the better. In my family my heroes were my dad and his brother George whose nickname was Huck. My dad was away from home a lot but when he was he used to read bedtime stories to my brother and me from the “Mother West Wind Stories.” Through his reading we learned about Sammy the Jay, Little Joe Otter, Reddy the fox, among other characters. We could observe these animals right outside our door. He was also known as one of the best pilots on the river and could navigate at night without the use of lights. Uncle Huck was a superb fisherman and hunter. He taught me how to fly fish for trout, shoot ducks, and hunt squirrels and grouse. He was a veteran of WWI and won three bronze stars and one silver star.

When I interviewed for the job with 3M I stayed in my brother’s apartment. He and his roommate had left for work when I got up. My interview was at 9:30 and I had only twenty-five minutes to get ready and be there. After showering, I realized I didn’t have any deodorant and I spied what looked like a spray can of Right Guard on the dresser. I grabbed it and sprayed under my arms. It was a spray can of adhesive! One of my brother’s roommates worked for the Adhesives, Sealings, and Coating division and had brought it home to remount a fallen bathroom tile. I didn’t have time to do anything about it. You do a lot of hand shaking during an interview and they must have thought I was partially disabled, but I got the job. I ended taking a scissors and cutting out the glued hair.

As far as writing is concerned I read the stories or poems to my wife and a neighbor lady. They critique it for me and let me know how I could improve it. I also belong to an internet writing site. The reviewers there have been instrumental in my improvement as a writer. My weakest skill is grammar. The only high school test I ever failed was a pop grammar quiz. I could answer only five questions out of ten. It was very embarrassing. My English teacher in high school was Mrs. Simmons who I had for all four years. She was an outstanding teacher.

I am a morning person. I feel more energetic and alive then. I do love the sun and light and have a touch of light deprivation depression. I could never live in Alaska. I have traveled south near the equator and marvel at how white the sunlight is. In Minnesota during the winter the sunlight has a yellow cast for most of the day.

There are many books that have had me in tears. Some of them are “The Rise and Fall of the Third Reich’ by William Shriver, “Unbroken” by Lille Hillenbrand, “The Boy on the Wooden Box” by Leon Leyson, “All the Light We Cannot See” by Anthony Doerr, and “The Boys in the Boat” by Daniel James Brown.

Mark Twain’s short story, “The Celebrated Jumping Frog of Calaveras County.” We had to read it for English in high school and I remember laughing reading it. Because of what I read, I don’t usually laugh but many books have made me feel good. I thoroughly enjoyed reading “The Chronicles of Naria” and most of Isaac Asimov’s science fiction since he is a very positive author.

My wife says I give too much advice. If I were to give somebody else advice it would be if you want to do something don’t just think about it but act. If you want to be a writer join a writer’s group and an internet writing site. By reviewing and being reviewed by other people your writing will improve. Reading a variety of genres and authors also helps because you can try and modify your style to match an author who you think writes well.

What surprises you about writing?

For me it is when I write fiction. Before I begin writing a story I have an idea in mind in how I want the story to go. Once I develop the main character he/she sometimes takes over and I end up writing it how the character wants it written including the ending. I consider my fictional characters real people even though they were developed in my mind. I think most fiction writers include much of themselves in their characters.

A Bundle of Colorful Yarns: An Eclectic Short Story Collection represents the author’s second book of short stories. A natural-born storyteller, Louis Winslow imbues his characters with honesty, “a trait I hold in high esteem.”

His new collection of 35 stories covers a wide range of topics. Most are action-adventure tales, and many feature outdoor themes. He explains, “The bulk can be described as realistic, but there are some fantasies. Although this is listed as a fiction book, there are a couple of nonfiction stories included.”

He hopes his works will be inspiring and will take readers on a truly eclectic journey.