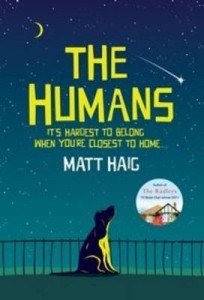 So we all know by now about me and this book so I won’t go on anymore (well maybe a bit), although my mission to ensure that everyone on the planet reads it is still ongoing…

As far as great Christmas presents goes you probably can’t go wrong with this one if you are trying to find something for a reader….It is many things. For me it was a life saviour, a book that gave me a new outlook on life and the things it throws at us. For others it has been pure entertainment, with its wry humour and often darkly ironic outlook. And it has an Alien. And a dog. So something for everyone then…go on pop it in someone’s stocking..they will love it.

A little while back I featured this book along with some soundbites from friends and loved ones on how they found it. If you missed that, here it is.

In a kind of a follow up to that, Matt Haig himself very kindly offered to answer some questions for me…some from me and some from them. Here is what he had to say.

How does it feel to know “The Humans” has touched so many people on a very basic level – because I know its not just me..

Well, if that’s the case, then it feels very nice, and also odd. Writing is a very private thing, almost the opposite of publication. But you just hope that if you write stuff that means something to you, that other people would like it too.

You work hard to bring the issue of Depression and its very real consequences out into the light of day – often it seems to the detriment of your own peace of mind – is it good to know that despite the pitfalls you are making a difference?

Yes. The thing with depression is that stigma directly affects the way people feel with it. Depression isn’t a disease of your heart or your lungs but of your thoughts. Negativity and stigma are salt in the wounds. Truth and honesty is part of the cure.
How closely do you follow the “life rules” that emerge during the telling of the tale?

Ha! Well, I know the theory, but the practice is hard!
Karen’s Question.

How much of the plot of a book do you know before writing it? Do you have a vague synopsis that gradually takes shape as you write and rewrite, or do you have a fairly clear idea of where it’s going to go from the first draft?

I have a vague idea in my head, but rarely anything written down. I have to write to find out where I am going. It’s a risky writing method, but at least I have editors.
Faye’s Question (bookshelf Butterfly)

Where did the inspiration for this story come from? Was it a life event or was it character led?

Kind of a general life event, in that it was during the serious depression I suffered in my twenties that I first had the idea of looking at humanity from an alien’s perspective, because that is pretty much how I felt.
Mels Question.

There are wide ranging conspiracy theories about Alien visitation – do you think its possible that Alien life has secretly visited us?
It’s possible! I mean, if an alien was advanced enough to get here they’d be advanced enough to disguise themselves. But why would they want to travel all that way without saying hello?

If you could spend a day with any alien from science fiction, who would you choose and why?

ET. Because he wouldn’t kill me. And he’s funny.
Aunty Gorg’s Question

If you ever actually met an alien and had to spend the day with it, to show a day as a human, what would you do/where would you go?

I’d go to a library, the biggest I could find, and say ‘Read all about us.’

Thank you so much Matt for taking the time.

So go on, get a copy of this book for someone you love. Why not?

Find out more about Matt and his books here: http://www.matthaig.com/