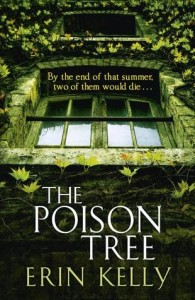 It is the sweltering summer of 1997, and Karen is a straight-laced, straight-A university student. When she meets the impossibly glamorous Biba, a bohemian orphan who lives in a crumbling old mansion in Highgate with her enigmatic brother Rex, she is soon drawn into their world — but something terrible is about to happen.

So Day Two of my Christmas Book Gifts idea’s and today I’m choosing “The Poison Tree” by Erin Kelly. Do you have a friend who is a lover of mysteries but not so hot on Police Procedurals? Who loves a story told from both past and present point of view where you know something is coming but you are not sure what? All involving characters you can love, and hate and love to hate? Then The Poison Tree is perfect! With one of the most satisfying endings for this reader ever, it was a huge favourite of mine the year I read it and remains so to this day.

Erin Kelly very kindly offered to answer some questions from me about the book amongst other things and here is what she had to tell me.

Tell me a bit about Biba – was she based on anyone you know or purely out of your imagination ?

Biba is a composite of various friends and acquaintances I knew in my late teens and early twenties. I never met a glamorous, intoxicating free spirit who wasn’t a complete narcissist, and that’s Biba in a nutshell. I say she’s a composite – actually, after the book was published a few people fingered the same person as the inspiration for Biba, and it occurred to me that I might have subconsciously been thinking of her as I wrote. And no I’m not telling you who she is.

And then we have Karen, who on the surface appears easily manipulated. How do you feel she developed over the course of the story?

Well, when the book opens she’s a ‘gifted child’ who has achieved academic success very early but her emotional and social development has been completely arrested. By the end of the book, the opposite is true: she has realised none of the potential her parents and tutors saw in her, but she’s strong, fierce and even old before her time. I loved writing her.

The Poison Tree has one of THE most satisfying endings I’ve ever read. Was it the plan all along?

No! The first draft of the novel, the one my agent sent out to publishers, ended with Karen answering her midnight phone call. I thought my cliffhanger ending was very bold and clever. I’d just read In The Woods by Tana French: she plays a similar trick and I was very influenced by the book. But the editors we shared The Poison Tree with were unanimous in their dislike of my open-ended book. They said that the book was so suspenseful and tightly plotted that they felt cheated. Two of them even asked whether there were pages missing because they were so sure there was more to it. And I listened to what they said; after all, they had edited dozens of books between them and this was the first one I had ever written. It was humbling to realise they they knew my own book better than I did! But their words rang true. Even in these days of self-publishing, expert insight that only professional publishers can bring is invaluable. So, I went away and rewrote the ending. And I’m so glad I did, because it felt completely inevitable, and it’s the thing readers love the most about the book. I get letters and emails from people who cheered at the last few pages, and I can’t now imagine the novel ending any other way.

The tv adaptation was very different – did you like what they did with it?
I was completely fascinated by the whole process and loved watching my characters brought to life on screen. The story was changed quite dramatically – the identity of the murder victim, for a start- and people assume that I was outraged by this. Not at all – actually, the sweeping changes needed to condense 350 pages into 90 minutes of television helped me think of it as a drama in its own right. The only thing I didn’t really like was the house they used. In my novel, the splendour in which Rex and Biba live is very much decaying – their house is literally falling down around their ears, it’s all they have and they don’t even own that – but the one on screen was a bit too polished. It was hard to feel much sympathy for these orphans of the storm when they lived in such a desirable property.
One book you would make everyone read if you could.
The Morville Hours by Katharine Swift. It’s non-fiction, a beautifully-written account of one woman’s life’s work, the restoration of a walled garden in Shropshire. It sounds incredibly dry but it’s not. I came across it when I was researching The Sick Rose and I must have given it to a dozen people since, and they have all loved it.

I read non-fiction and memoir for comfort these days because I can’t fully switch off when I’m reading novels any more. I loved both Rupert Everett’s memoirs and I love Bill Bryson.

On a side note, Erin Kelly also wrote “The Burning Air” which has one of the best game changer twists I’ve ever read – you may want to consider that one also! 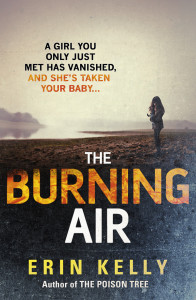