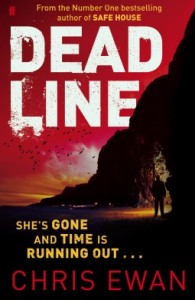 So a very happy publication day to Mr Ewan for the terrific thriller “Dead Line”. I tracked Chris down and asked him a few questions – see what he had to say, followed by a review and some linky links.

Dead Line is a terrific thriller. Was it fun to write?

Dead Line involved a real change of approach for me, and doing something new and challenging is always fun (even if it sometimes didn’t feel that way when I was figuring out how to write the book). The biggest change is that Dead Line is the first novel I’ve narrated almost entirely in third-person. Most of my writing before now has been driven by first-person narration, but I enjoyed the third-person sections I wrote for Safe House, so I thought I’d experiment with writing more of a novel in this way. Dead Line is a very dark book, set in the sunshine of Marseilles, and playing with that contrast (as well as visiting Marseilles for research) was a real blast. On top of that, learning more about the somewhat murky kidnap and ransom industry, and some of the individuals who make their living as negotiators, was fascinating.

Which of the Dead Line characters is your favourite.?

Much of the novel is told from the perspective of Daniel Trent, a hostage negotiator who is trying to find his missing fiancee. He’s a tough, uncompromising character, who is willing to go to extremes to get what he wants – pushing far beyond what normal people might do. And writing about a character like that can’t fail to be interesting. But I also really liked writing about Stephanie Moreau, a beautiful ballet dancer who happens to be married to the crook Trent suspects of abducting his fiancee. Stephanie came out much darker, and more damaged, than I’d anticipated.

Do you have any particular writing habits?

I have a bunch of writing habits that I try to stick to as much as I can, which is not as easy as it used to be now that we have a baby daughter to shake things up! What I aim for is to be at my desk by 9am, to write five pages (double-spaced) straight to my computer, then to come back the next day and do exactly the same thing until a first draft is complete. Usually I work seven days a week, although just recently I’ve been taking a day off on a weekend. If all goes to plan, I’ll have a first draft of a novel after something like four months, and from then on I just work as many hours as I can for the next five months, rewriting the manuscript and getting the book into shape. I do a lot of rewrites and revisions before I show the book to anyone. When it’s close to ready, my wife reads it. After that, I usually do a final polish before sending it to my agent. It usually takes me a year from first coming up with an idea to completing  a book. Fingers-crossed the same will be true for the book I’m currently working on!

Boringly healthy, on the whole. Unless I’m in the States, and then all bets are off — usually meaning pancakes and strong coffee (and then repeat!).

What are you reading at the moment?

I’m reading a whole bunch of great books at the moment, including The Shining Girls by Lauren Buekes, Eleven Days by Stav Sherez, and A Willing Victim by Laura Wilson. A book I finished not too long ago, and loved, is The Cry by Helen Fitzgerald.
One thing you would want if stranded on a desert Island?
Hey, I live on the Isle of Man, which sometimes doesn’t feel so different. But a magic portal into a pancake house would suit me.
Thanks Chris!
Review

Having loved “Safe House” I was very much looking forward to this novel from Mr Ewan and I was very excited to receive a copy from Netgalley – thank you kindly.

Daniel Trent works in the dangerous field of hostage negotiation…along with his fiancee Aimee. When Aimee goes missing herself, Trent has a good idea of who is responsible…but then his chief suspect is kidnapped and so begins a desperate search for answers. Can Trent save the kidnap victim and find Aimee?

Well what can I say…fast paced and amazingly addictive this novel rushes you headlong into Daniel Trent’s world and what a world it is. Cleverly strung out, my desire to find out what happened to Aimee soon matched Trents own…and I breathlessy followed him through all the twists and turns of the story to the final resolution – and that resolution my reading friends was clever, unexpected and brilliant.

I adored Trent as a character. Single minded, hell bent on the destruction of anyone who gets in his way no matter the consequences made me add him to my list of “literary characters I’d certainly marry”…in fact perhaps a future blog piece can talk about all those guys – he’ll be somewhere near the top. The rest of the characters played their part admirably – trust no-one would be my advice and even then you’ll be surprised at what happens. My favourite character by far was…ok I’m not going to tell you. You tell me when you get a chance to read it and we’ll compare notes! No spoilers here.

I adore a good page turner and this novel certainly falls into that category. There are rare restful moments – make the most of them because shortly you’ll be on that rollercoaster again. Don’t fall off! Enjoy. Happy Reading Folks!

When Rob Hale wakes up in hospital after a motorcycle crash on the Isle of Man, he is told that Lena, the woman he claims was travelling with him, doesn’t exist. The woman he describes bears a striking resemblance to his recently deceased sister, Laura, but has he really only imagined her?

Convinced that Lena is real, Rob sets out to find the answers to who she is and who is behind her disappearance. He is aided in this by Rebecca Lewis, a London-based PI, who has come to the island at the behest of his parents to investigate his sister’s suicide. But who is Rebecca really and how did she know his sister?

Together Rob and Rebecca follow the clues to discover Lena’s fate. In doing so they realise that even on an island where most people know each other, everyone hides a secret, and sometimes your best option isn’t to hide but to stay and fight.

My grateful thanks to Chris Ewan for answering some questions for me and for providing me with such a great reading experience!