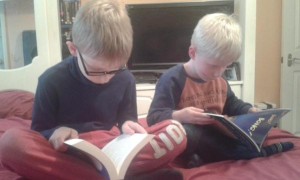 My son Harry is  8 and is obviously a chip off the old block. Here in a question and answer format or simply me talking about his reactions, with added notes from Mum we will review some of the books that we have read together and some that he has read himself. I have no doubt that he will be writing his own full reviews before too long. 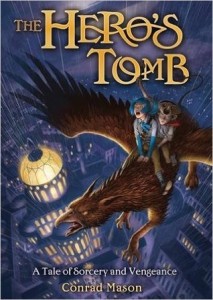 Azurmouth! In all the Old World there is no city so vast, so sprawling…or so dangerous.Half-goblin boy Joseph Grubb has come to find the truth about his parents. His friend Tabitha has followed him across the ocean, hoping to protect him from the deadly white-coated butchers of the League of the Light. Meanwhile her guardian Captain Newton is determined to recover an ancient artifact stolen by the League’s sinister Duke of Garran.But in Azurmouth nothing is as it seems. Old enemies will rise. Long-buried secrets will be uncovered. And the League will awaken an ancient power, threatening the Old World with a terrifying new dawn.Soon Joseph, Tabitha and Newton will have to face their deepest fears, and a final reckoning, at the Hero’s Tomb.

The Hero’s Tomb is a book that Harry and I read both together and separately – we thoroughly enjoyed the experience, from my point of view it was an easy read, fun and I could tell that Harry was really into it – possibly slightly older than he would normally read by himself but often he would dive back in while I was busy with other things. I might also recommend that you read these in order which we blatantly have not – although it did not detract from our enjoyment of the story I think perhaps there would have been an extra layer and understanding had we known what had come before because this is obviously part of a whole. The writing is excellent, easy flowing and engaging – for both of us, Harry as a fledgling reader will absolutely refuse point blank to continue with anything he is not enjoying and that did not happen here. So what did  Harry think then….

Harry loved Joseph (and by the way played a LOT of games with his little brother based on this book – in a very bossy way to ensure that Tristan understood his role in things!To me this means he was very taken with it) and was especially into the descriptions of Azurmouth which he really wanted to visit (and he’s drawn some pictures of it currently residing on my fridge) – sometimes I had to explain some of the longer words which of course is always a good thing and occasionally we would re-read bits especially the more adventurous portions which he adored. In a lot of ways this was his first more “grown up” read although he’s dipped a toe into Enid Blyton and of course Harry Potter, I really don’t think we could have chosen better. It was challenging for him (which he likes and is good for him at this stage of development) but not so much that it frustrated and when we had finished he talked about it for a good while afterwards.

Overall I’d say we did well with this one – it took a while as he really did want to do it as much by himself as possible. But if you are looking for a strong childrens series that you can read both together and apart, this would come recommended from us. Harry has asked me to get the others and so I will.

Next up: Harry and I are going to read Liquidator by Andy Mulligan. Another gorgeous gift from David Fickling and described as Enid Blyton meets John Le Carre and Bono. Consider ME sold. We’ll see what Harry thinks 🙂 Watch this space.