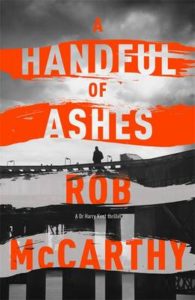 Susan Bayliss became notorious when she blew the whistle on her boss, a heart surgeon at a renowned children’s hospital. She accused him of negligence, operations were stopped and an inquiry launched. In the end she was the one suspended as a troublemaker.

Now Dr Harry Kent, a medical examiner with the Met Police, has been called out to certify her suicide.

But something about the scene is wrong. Someone held Susan down…

The grieving parents of the children who died demand answers. The hospital is stonewalling. Everyone has secrets – it’s up to Harry and DCI Frankie Noble to find out which were worth killing for.

I was the BIGGEST fan of book one in this series (more details below if you missed it) and with “A Handful of Ashes” I can honestly say this has moved up to favourite series status on my bookish wishlist – one of a handful I’m going to be hotly anticipating every year for as long as they continue. Long may that be…

I’m a sucker for a good medical drama and an even bigger one for a good crime drama – with the Harry Kent series Rob McCarthy brings the two together in a fast, addictive, well considered thriller that just had me blasting through it with little thought to anything else around me. Don’t you love those ones?

In this story we have a suspicious “suicide”, a possible hospital cover up, grieving parents, danger lurking around every corner and our (anti) hero Dr Kent slowly falling apart at the seams whilst trying to help our (anti) heroine Frankie Noble solve the conundrum. She’s not exactly the most grounded police officer ever but both of them are superbly engaging, inevitably flawed but so beautifully described in sheer force of personality that you just get pulled along with them. The plot is  thoroughly twisted, highly charged emotionally and has an ending that had me on the floor. I loved it.

I’d like to give a nod to at least one beautifully written thrilling scene in this involving a fight to save a life – as I came to the end of that chapter I found myself quite literally sitting on the edge of my seat (not that easy in a giant swivel chair) I had to sit and have a nice cup of tea before continuing on. That is not the only genuinely immersive bit of scene setting in A Handful of Ashes but it’s probably the one that will stay with me – What is great about it is that these moments are interspersed with quieter more considered moments and the author digs deep into the multiple layers that make up his characters, insightful writing that means you really feel for everything they go through.

Both the medical and the procedural elements that make up the story feel highly authentic, I am definitely one for the tortured souls in fiction therefore Harry Kent holds my attention (I may be a little in fictional love) and overall this is terrific writing, terrific plotting and well, just plain terrific.

Purchase A Handful of Ashes

When Solomon’s life is put in danger again from the safety of a critical care ward, it becomes clear he knows something people will kill to protect.
Determined to uncover the secret that drove the boy to such desperate action, Harry soon realises that someone in the medical world, someone he may even know, has broken the doctors’ commandment ‘do no harm’ many times over..

2 Responses to Latest Reads: A Handful of Ashes Rob McCarthy