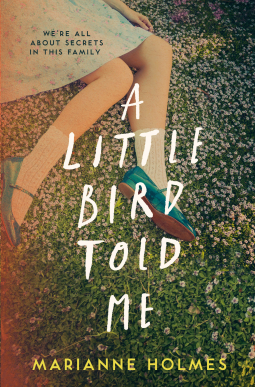 Besides, if you were one half evil, wouldn’t you want to know about the other half?

In the scorching summer of 1976, Robyn spends her days swimming at the Lido and tagging after her brother. It’s the perfect holiday – except for the crying women her mum keeps bringing home.

As the heatwave boils on, tensions in the town begin to simmer. Everyone is gossiping about her mum, a strange man is following her around, and worst of all, no one will tell Robyn the truth. But this town isn’t good at keeping secrets…

Twelve years later, Robyn returns home, to a house that has stood empty for years and a town that hasn’t moved on, forced to confront the mystery that haunted her that summer.

And atone for the part she played in it.

I read the entirety of this book this morning – a beautifully written literary mystery with a gorgeously immersive sense of place and time – anyone who ran wild through the Summers of the 70’s and 80’s will relate strongly to this story, although hopefully none of them had a Summer exactly like these…

This is also a multi layered family drama, we watch through the eyes of young main protagonist Robyn as she tries to understand and interpret adult behaviour, her own secretive nature and sense of self playing a divisive part as events unfold.

One of the huge strengths of this novel comes in the relationship between Robyn and her Brother Kit – older than her, with stronger memories of where they came from, their yin and yang is beautifully told and absolutely riveting. As is the mystery playing out on the page in front of the readers eyes…I won’t spoil it at all, this is a journey of a novel and as such best read cold.

I loved it. Clever, a little haunting, often unexpected, author Marianne Holmes is a talent to watch – her use of language brings the lives of her characters and the paths they wander to vivid, wonderful life.

You can purchase A Little Bird Told Me Here.