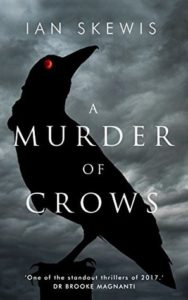 The most violent thunderstorm in living memory occurs above a sleepy village on the West Coast of Scotland.

A young couple take shelter in the woods, never to be seen again…

DCI Jack Russell is brought in to investigate. Nearing retirement, he agrees to undertake one last case, which he believes can be solved as a matter of routine.

But what Jack discovers in the forest leads him to the conclusion that he is following in the footsteps of a psychopath who is just getting started. Jack is flung headlong into a race against time to prevent the evolution of a serial killer…

A Murder Of Crows is a literary crime novel with a beautifully dark and sinister tone to it, within a small claustrophobic setting which is descriptively immersive – I fell into it and didn’t really look up until I was done.

A young couple take shelter in the woods during a harsh storm and then disappear – Jack Russell (brilliantly named!) takes on the case – but this is one that is in no way straightforward, with it’s roots in the past and a village full of secrets. The characters pop – I was especially taken with the way the author tackled Alice, who has dementia – and all of them have an intricately woven history that evolves during the telling.  The writing style is classically good with all the elements coming together in a truly unsettling finale.

The plotting was cleverly character and timeline driven to maximum effect, there are twists and turns in the narrative but they are more of character than mystery – the final moments resonate unexpectedly and leave you with a deeply discombobulated feeling of unease. I loved it.

I believe there is a follow up in the works for which I am truly grateful. Detailed, lyrical and imaginatively done, A Murder of Crows was a huge hit for me.

Purchase A Murder of Crows