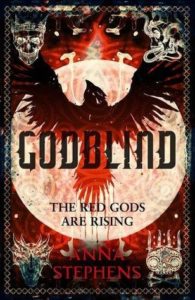 The Mireces worship the bloodthirsty Red Gods. Exiled from Rilpor a thousand years ago, and left to suffer a harsh life in the cold mountains, a new Mireces king now plots an invasion of Rilpor’s thriving cities and fertile earth.

Dom Templeson is a Watcher, a civilian warrior guarding Rilpor’s border. He is also the most powerful seer in generations, plagued with visions and prophecies. His people are devoted followers of the god of light and life, but Dom harbors deep secrets, which threaten to be exposed when Rillirin, an escaped Mireces slave, stumbles broken and bleeding into his village.

Meanwhile, more and more of Rilpor’s most powerful figures are turning to the dark rituals and bloody sacrifices of the Red Gods, including the prince, who plots to wrest the throne from his dying father in the heart of the kingdom. Can Rillirin, with her inside knowledge of the Red Gods and her shocking ties to the Mireces King, help Rilpor win the coming war?

Warning: Do not read this book if you are of a nervous disposition (Cue: Everyone running off to read this book to find out why – excellent, as you are in for one hell of a ride)

Godblind is dark fantasy at its very best, bloody, visceral, excellent characters and a top notch fantasy plot with increasingly imaginative world building. Including at least one incredibly realistic scene that will have certainly have you reeling if you are of the male variety and a whole plethora of adrenalin building action sequences Anna Stephens still manages to create an almost perfect character drama. Shades of grey in an immoral world where the good guys and the bad guys blend into each other for much of the telling until finally shaking themselves out towards the end and leaving you desperate to find out what happens next.

The plot is twisted, multiple points of view keeping us in the overall picture, this is not a straightforward start middle and end but a beautifully layered, often horrific, always compelling journey that takes many paths and drops you in and out of the action, building to a rip roaring, rollercoaster ride of a finale. Very much a part one, the scene is set for what is bound to be the trip of a lifetime. Seriously if somebody doesn’t give me book 2 soon I may actually explode.

Incredibly immersive descriptive prose grips you throughout, the author pulls literally no punches in letting you know what life in this world is like, Godblind is full of magic and mayhem, within an utterly fascinating political landscape that edges around reality within the fantasy and feels totally authentic from first page to last.

Godblind is banging brilliant, accomplished writing, deliriously psychotic plotting, cleverly manipulative character building, a book that once you are in it you cannot escape it until you are done, nor would you want to. 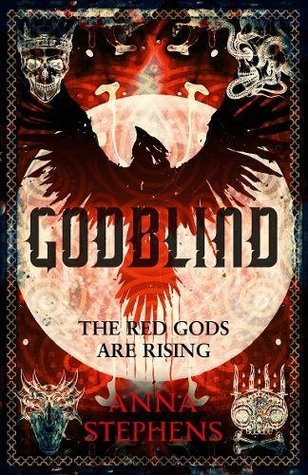