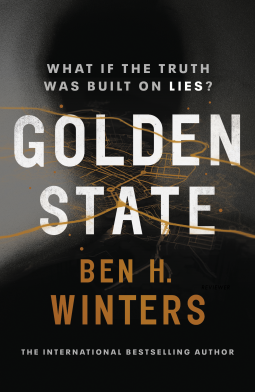 Welcome to Golden State, where the worst crime you can commit is to lie.

Laz Ratesic is a veteran of the State’s special police. As one of the few individuals allowed to ‘speculate’ on what might have happened when a crime is committed, it’s his job to find the full and final truth.

But when a man falls from a roof in suspicious circumstances, it sets in motion a terrifying series of events which will shatter Laz’s world for ever.

Because when those in control of the truth decide to twist it, only those with the power to ask questions can fight back.

I’m the BIGGEST fan of The Last Policeman trilogy so to say I was excited to read “Golden State” would be a serious understatement.

It didn’t disappoint- this is a hugely relevant speculative tale, but also a massively entertaining piece of fiction that had me banging through it in record time…

Laz is brilliant, so engaging, living in the shadow of his legendary brother, one of the few people tasked with keeping the record quite literally straight as he senses lies in the air around him.

The world Ben Winters builds here is utterly fascinating. Everyone is watched, recorded, logged 24/7. People open conversations by quoting verifiable facts at each other, a lie is illegal and the harshest punishment is exile into a world before that no longer exists. There are too many layers to this inventive, totally believable place to get them all across in a simple review but it is pretty much the opposite of how we live now.

We learn all this through the eyes of Laz, who is an utter believer in the system and it’s protection of citizens. Indeed this is a world you may nod along with, reasonably convinced through the power of this character that it is absolutely justified and right. It took me a while to find an issue with it…

Then a man falls from a roof, there are definitely anomalies, Laz is thrown together with a new partner and together they will uncover something more than the truth…and his world will change forever.

This was beautifully twisted in its mystery elements and throws up so many thought provoking moral quandaries your head will spin. That’s quite apart from the twists of plot that are so often unexpected, there’s no predicting the outcome of this one although you might think so – and even if there was, speculation is illegal don’t you know unless you are authorised…

I loved it. Quirky, clever and very timely, I will state that “Objectively So” Golden State is a truly excellent piece of storytelling.