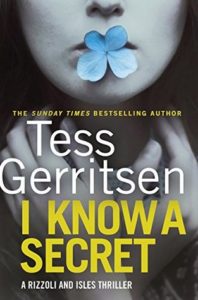 The crime scene is unlike any that Detective Rizzoli and medical examiner Maura Isles have ever before encountered. The woman lies in apparently peaceful repose on her bed, and Maura finds no apparent cause of death, but there is no doubt the woman is indeed dead. The victim’s eyes have been removed and placed in the palm of her hand, a gesture that echoes the terrifying films she produces. Is a crazed movie fan reenacting scenes from those disturbing films?

When another victim is found, again with no apparent cause of death, again with a grotesquely staged crime scene, Jane and Maura realize the killer has widened his circle of targets. He’s chosen one particular woman for his next victim, and she knows he’s coming for her next. She’s the only one who can help Jane and Maura catch the killer.

But she knows a secret. And it’s a secret she’ll never tell.

I can’t believe there is any avid crime reader out there who has not yet dipped into the Rizzoli and Isles series from Tess Gerritsen but if that is you then you might want to take a look – I have yet to read one that disappointed me (and I’ve read them all sometimes more than once) right from way back when “The Surgeon” was published.

The two main characters have such a fascinating story arc throughout the series (maintained and intriguingly expanded once again here) and in “I Know a Secret” they have a strange and unpredictable case to deal with, a new possible nemesis for Jane Rizzoli that opens up the series beautifully and the usual brilliantly insightful medical detail layered into the cleverly plotted mystery element.

The author has a medical background that makes that side of things oh so authentic (and often horrifyingly thought provoking) and the storytelling is simply divine – I read this, as all the others, in one sitting – starting it yesterday morning and finishing yesterday evening, emerging breathless from an ending that just made me desperate for the next novel. Waiting. I HATE waiting.

Even the usually stoic and unshakable Maura Iles gets thrown a curveball or two in this instalment – I’ve always loved her for her tough outer shell hiding an inner emotional turmoil, her friendship with Jane is solidly reassuring and endlessly addictive – as a reader you can’t really ask for a better pair to head down into the darkness with.

Darkness is right too – these two see the worst of human frailty and come in contact with some dangerous, erratic people – The secret being hidden here is classically engaging and I was very taken with the other voice, Holly, she was captivating and kept me on my toes. Overall a genuinely excellent addition to the Rizzoli and Iles hall of fame and one that has just confirmed my love for them.

Purchase I Know A Secret 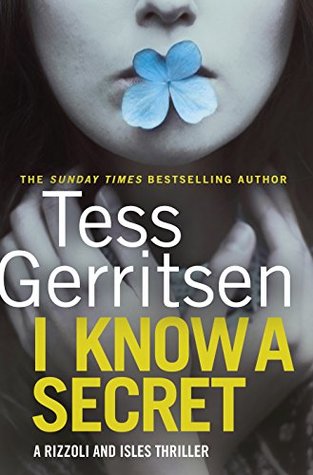