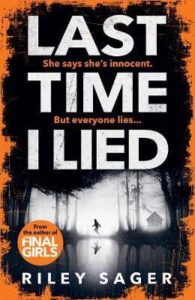 Have you ever played two truths and a lie?

Then three of her new friends went into the woods and never returned . . .

Now, years later, Emma has been asked to go back to the newly re-opened Camp Nightingale. She thinks she’s laying old ghosts to rest but really she’s returning to the scene of a crime.

Because Emma’s innocence might be the biggest lie of all…

Having been one of the first and  (arguably) the biggest fan of “Final Girls”, it playing into my love of  horror movies so very well, I was both excited and a little concerned to get hold of “Last Time I Lied” because you know, sometimes these author types can only really pull it off the once….Hmm.

NOT so with Riley Sager who has, with Last Time I Lied, written a right old proper page turner, with a brilliantly engaging unreliable narrator in Emma and a creepy, underlying menace to the prose which really digs deep. We have a group of enigmatic girls, a mysterious disappearance, a haunting lake and quite a few nefariously creepy goings on to throw into the mix, with a cleverly obfuscated plot that, in its final moments, managed to actually surprise me. Huge points for that one…

It is also beautifully written, on the literary side of psychological thrillers with great character depth and the ability to evoke an emotional response on quite a few levels, which appeals to me always – even if that emotional response creates a tendency to check under the bed before I get in it.

As history appears to be repeating itself for poor old Emma, it is compelling and downright riveting – we see past and present mixing up in her mind and in ours, as she returns to the scene of the “crime” determined to find closure. I liked the art angle, I could see the Emma’s paintings in my head so well described were they, weaving in and out of the wider plot to great effect.

Think Hanging Rock and shades of Camp Crystal Lake, with added literary flare and you’ll come close to the feel of “Last Time I Lied” – Riley Sager proving that the psychological thriller is far from dead, as long as it is in the right hands. These were the right hands.

One of my favourites so far this year. 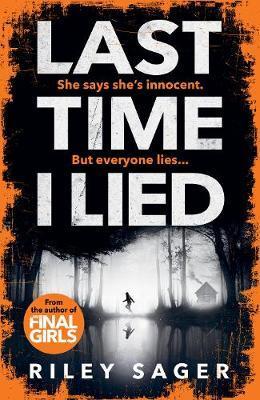