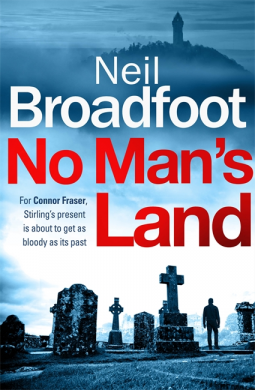 A mutilated body is found dumped at Cowane’s Hospital in the heart of historic Stirling. For DCI Malcolm Ford it’s like nothing he’s ever seen before, the savagery of the crime makes him want to catch the murderer before he strikes again. For reporter Donna Blake it’s a shot at the big time, a chance to get her career back on track and prove all the doubters wrong. But for close protection specialist Connor Fraser it’s merely a grisly distraction from the day job.

But then another bloodied and broken corpse is found, this time in the shadow of the Wallace Monument – and with it, a message. One Connor has received before, during his time as a police officer in Belfast.

With Ford facing mounting political and public pressure to make an arrest and quell fears the murders are somehow connected to heightened post-Brexit tensions, Connor is drawn into a race against time to stop another murder. But to do so, he must question old loyalties, confront his past and unravel a mystery that some would sacrifice anything – and anyone – to protect.

A new series from Neil Broadfoot and boy he likes to kick things off in style.

No Man’s Land is a tense and beautifully plotted thriller with some great characters and a setting known to me courtesy of the Bloody Scotland Festival- which made it twice as good for this reader although even if you’ve never been to Stirling you’ll feel like you have.

Connor Fraser is a highly engaging protagonist to follow along with and old sins cast a long shadow….

When people start dying (horribly- I do not recommend eating whilst reading) Connor is caught up in a case that has roots in his past, along with DCI Ford and reporter Donna Blake both in it for other reasons. These three are all separate yet together in a story that is both thrilling and considered, with plenty of obfuscation and a hugely addictive mystery element.

No Man’s Land is one of those page turners, a proper piece of inventive crime writing, the sort that I love. An authentic feel with plenty of heart and a perfect finish.

You can purchase No Man’s Land (Constable) Here.