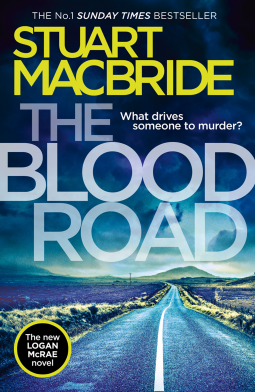 When Detective Inspector Bell turns up dead in the driver’s seat of a crashed car it’s a shock to everyone. Because Bell died two years ago, they buried him. Or they thought they did.

As an investigation is launched into Bell’s stabbing, Logan digs into his past. Where has he been all this time? Why did he disappear? And what’s so important that he felt the need to come back from the dead?

But the deeper Logan digs, the more bones he uncovers – and there are people out there who’ll kill to keep those skeletons buried. If Logan can’t stop them, DI Bell won’t be the only one to die…

I love this series so much. Actually I’ve loved all this authors books but there’s a special love involved in one featuring Logan and Steele for many many reasons…

There’s just no substitute anywhere in crime fiction for this pair, whether featured together or apart, in the case of The Blood Road luckily we get plenty of togetherness..Much to Logan’s dismay..

The story as ever is a dark and hugely emotive one, this time featuring missing children and the continuing saga of Bell. I like Logan in his “professional standards” form but soon he’s hot on the trail of a killer, Steele “helping ” in her usual indomitable fashion. The dialogue is fast, pacy, darkly humorous and extraordinarily engaging, you just get swept along with them all in a kind of hypnotic reading trance, often involving inappropriate giggling.

I adore the background noise Stuart MacBride embeds into his narrative making the setting pop, all the characters good, bad and inbetween are beautifully drawn and wonderfully complex, you genuinely feel they are real people and if you were to pop up to their necks of the woods you might run into them.

This particular tale made me both laugh and cry, nobody messes with the emotional core of the reader quite like this author and he does it seemingly effortlessly.

The Blood Road really is stand out crime fiction at its very very best. Head and shoulders above the rest.

You can purchase The Blood Road Here.