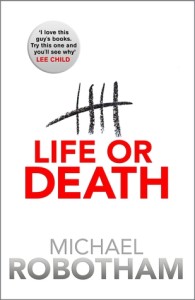 Today am VERY happy to have Michael Robotham on the blog as I was lucky enough to get to ask him a few little questions about the brilliant “Life or Death” – available now in Paperback from Sphere.

Tell us a little about the inspiration behind the story and characters in “Life or Death”.

The idea for the story was triggered by a real-life escape 20 years ago in Australia when a twice-convicted killer called Tony Lanigan escaped from prison on the eve of his release on parole. Lanigan has never been seen since and many people suspect he was murdered, but I’ve always been intrigued by his escape. I spent years tossing the idea around, loving ‘the hook’ but unable to come up with a reason. Finally I settled upon the idea of a robbery and missing millions. I also knew there had to be a love story at the heart of LIFE OR DEATH – otherwise it wouldn’t explain why Audie Palmer endured so much misery and hardship in prison, only to escape the day before his expected release.

The novel has both some brilliant characters and an intensely authentic sense of place – how difficult is it as a writer to balance the two?

It’s a daunting prospect to set a novel in a strange place (and strange is a word I use advisedly when I talk of Texas). I have lived and worked in America before, but always on the east or west coasts.

There’s a slogan that says Texas is ‘like a whole other country’ and it’s not wrong. It’s not just the size, or the cultural diversity – it’s the food, the pride, the people and the history. I remember seeing a number plate that said, ‘Don’t mess with Texas’. I still don’t know whether that was an anti-littering message or a threat.

I spent seven weeks in the Lone Star State, scouting locations, sitting in bars, chatting to locals and driving enough miles to get white line fever. During that time I met prison warders, bondsmen, bounty hunters, strippers, deputy sheriffs and a district attorney.

On top of this, I spent months listening to audio books by writers like Cormac McCarthy, James Lee Burke and Phillip Meyer, trying to get the rhythm of the language and immerse myself in the place.

Creating believable characters is a different process, but they have to live and breathe in my imagination before I am confident the reader will believe them. My motto, my mantra, my abiding objective as a writer comes down to three words: MAKE THEM CARE.

Audie was a brilliant character, full of shades of grey. Did his story change much in the writing or did it all go to plan?

I never plot my books in advance. Initially I thought I would set much of LIFE OR DEATH with Audie Palmer in prison, but decided to open with the prison escape. Apart from that I knew the story would involve a robbery, missing millions and a love story. I had no idea how it would end or if Audie would survive, but I did want to create a story with the heart and soul of something like The Shawshank Redemption.

When it comes to the crime and thriller genre, which is very popular, how do you find ways to keep it fresh, give the readers something different each time? (Which you do!)

I think a lot of writers in the crime and thriller genre establish particular characters and move them around like pieces on a chessboard. They can be great stories, but often each new book is much like the previous one. I am determined to never write the same book twice, which is why I regularly change perspectives, tenses, locations and narrators. This keeps me ‘fresh’ as a writer because I don’t get bored. Similarly, I think my readers have accepted now that I won’t give them the same old stuff. Hopefully, they trust me enough as a storyteller to let me take them to new locations and introduce new characters.

When not writing, what kind of novels do you enjoy reading yourself?

I have very eclectic tastes as a reader but choose very carefully. I will always try to read the latest water-cooler or barbecue-stopper book. Similarly, I read books that pick up literary awards or garner brilliant reviews. Oddly I don’t read a lot of crime fiction, unless it is very high quality.

Which writers inspired you growing up?

One name stands out among many – the brilliant Ray Bradbury. I discovered him when I was about twelve years old, devouring his brilliant short story collections such as The Illustrated Man and The Martian Chronicles. You couldn’t get all of his books in Australia, so I wrote him a letter addressed simply: Mr Ray Bradbury, Random House New York. I don’t even remember putting a stamp on the envelope. Three months later I came home from school to find a package on the kitchen table. Inside were the three or four Bradbury titles that weren’t available in Australia, along with a letter from the great man himself saying how thrilled he was to have a young fan on the far side of the world. Ray Bradbury is the reason I wanted to be a writer.

Why would a man escape from prison the day before he’s due to be released?

Audie Palmer has spent a decade in prison for an armed robbery in which four people died, including two of his gang. Five million dollars has never been recovered and everybody believes that Audie knows where the money is.

For ten years he has been beaten, stabbed, throttled and threatened almost daily by fellow inmates and prison guards, who all want to answer this same question, but suddenly Audie vanishes, the day before he’s due to be released.

Everybody wants to find Audie, but he’s not running. Instead he’s trying to save a life . . . and not just his own.

I’ve long been a fan of Michael Robotham’s crime novels, this one is a brilliant and addictive standalone story that had me madly reading in great big chunks as I was absolutely determined to find out what on earth was going on.

One day before he is due to be released, Audie Palmer makes his escape from Jail and appears to go on the run – but why? Another 24 hours would have seen him free. What follows is a heart stopping race against time as Audie attempts to evade his would be captors and right a wrong – there is a lot more going on than meets the eye and it is truly compelling stuff. At turns very emotional and then extremely thrilling, it twists and turns its way to an extremely electrifying finale.

I’ve always loved the depth that this author brings to his characters – there was a definite touch of the “Shawshank” about this one as we learn about Audie, his time in Jail and eventually what it is that is driving him. Surrounded by a beautifully drawn cast of eclectic characters, the whole thing is ingeniously constructed, completely hooks you in right from the start and has such a wonderful flow to it that you won’t want to put it down. Indeed as I headed into the final part of this, I couldnt put it down – I completed it bleary eyed yet satisfied at 3am one morning.

Michael Robotham never fails to deliver on great writing, intelligent plotting and people you will fall for and this was no exception to the rule. I have absolutely no hesitation in giving this, and all the other books from this author, a highly recommended tag.

4 Responses to Life or Death – Interview with Michael Robotham.