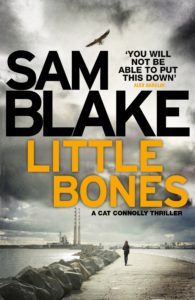 Today I am very pleased to welcome Sam Blake onto the blog talking about some Landmark cases in a great lead in to her novel “Little Bones” which I will be reviewing very soon.

It is through the determination and often sheer brilliance of the teams who champion the victims – the police and forensic scientists who spend their days (and nights) looking for the tiniest clues – that killers like Dwyer are brought to justice. By its nature, forensic science is low profile – it involves scientists laboriously analysing often minute samples – but its importance in criminal investigations is beyond debate.

Little Bones is set in Ireland, where Dr James O’Donovan was, until his retirement in 2002, the founder and senior forensic scientist of the Garda Technical Bureau of the Garda Síochána (the Irish police). He is most notable as a key witness in the IRA murder of Louis Mountbatten, 1st Earl Mountbatten of Burma, and was the target himself of Irish criminal Martin Cahill, known as The General. As the Jim Cusack in the Irish Independent explains, “In May 1982, believing that improvements in forensic science would link him to robberies and other crimes, he [Martin Cahill] arranged for the State’s chief forensic scientist, Dr James O’Donovan, to be murdered. Explosives were attached to the exhaust manifold in Dr O’Donovan’s car. As he drove to work, the heat from the manifold detonated the plastic explosive, causing permanent crippling injury to the doctor.”

The injuries he received were devastating, but they didn’t stop him.

Jim Donovan’s work resulted in landmark rulings that changed the future of criminal investigation. In Little Bones a baby’s bones are found in the hem of a wedding dress, and for the investigating detective, Cat Connolly, the case becomes very personal. Along the way, Jim Donovan’s research into the Mountbatten case and sand particles becomes crucial.

Lord Louis Mountbatten, 79, and his family traditionally spent every summer at their castle, Classiebawn, in Sligo, and boat trips were regular holiday outings. But on August 27th 1979 their boat that was blown up by the IRA. A cousin once removed of Queen Elizabeth II, Mountbatten died from his injuries, together with his grandson, Nicholas Knatchbull, 14, and Paul Maxwell,15, a local boy who was their boatman. Seven people were thrown into the sea, and the Dowager Lady Brabourne died the day after the attack.

Granules of sand found in one suspect’s car, and on his clothes and shoes were discovered by Jim Donovan who explained to the court that “granules of sand are highly distinctive when magnified 300 times under the electron microscope.” Donovan conducted a study of the sand in the area and linked the sand found, to sand where the victims’ boat had been moored. It was crucial evidence that led to the conviction of Thomas McMahon.

Indeed, Jim realised that sand differed hugely depending on its location…in Little Bones, the sand identified in the traces of soil found on the bones proves crucial in locating the crime scene.

Jim Donovan worked on many thousands of cases during his career, but his evidence in the conviction of two British nationals, Geoffrey Evans and John Shaw was crucial. Evans and Shaw planned to go on a murder and rape spree in Ireland in 1976, planning to abduct, rape and kill one woman a week. Evans and Shaw were Ireland’s longest serving prisoners and laid claim to the notorious title of Ireland’s first serial killers. Still in their 30s when they arrived in Ireland in 1974, both men were already on the run from British police who wanted to question them in relation to three savage sexual assaults on women that had happened in and around Manchester. Shaw also had 26 previous convictions, including two sex attacks in Britain.

Their first victim was 23 year-old Elizabeth Plunkett whom they savagely beat, raped and strangled on August 28, 1976. Leaving her body in woodland they returned and dumped it in the sea, weighed down with a lawnmower. A month later her body washed up about 60km away.

Their second victim was Mary Duffy, whom they murdered on September 22, 1976, as she was on her way home from work. Shaw savagely attacked her and they bundled her into the car where she endured a horrifying assault. She was raped repeatedly, beaten and badly injured by the time they car reached Ballynahinch, not far from Clifden. They brought her to an isolated wood, where she was again raped repeatedly and was tied to a tree for hours. Eventually, they strangled her, and once again stole a boat, weighing her body down with a sledgehammer, an anchor and a concrete block and throwing her overboard into Lough Inagh.

Jim Donovan played a significant role in identifying Shaw and Evans after finding teeth marks in a gag that had been stuffed into Mary’s mouth – her teeth had left a perfect impression in the ball of toilet paper the killers used to stop her screaming.

While Little Bones is entirely fictional, it is essential to me that the procedures and forensics featured in the story are accurate and real. It’s also vital to me, as a crime writer that those affected by real crime are respected and while their stories might inspire fictional events, they are not exploited. I’m lucky to have a source close to hand – my husband was a member of An Garda Síochána for 30 years, and I hope, as a result, Little Bones and characters who inhabit its pages, are as real as they can be.

Sam Blake is a pseudonym for Vanessa Fox O’Loughlin, the founder of The Inkwell Group publishing consultancy and the national writing resources website Writing.ie. She is Ireland’s leading literary scout who has assisted many award winning and bestselling authors to

publication. Vanessa has been writing fiction since her husband set sail across the Atlantic for eight weeks and she had an idea for a book.

Little Bones is the first in the Cat Connolly Dublin based detective thriller trilogy. When a baby’s bones are discovered in the hem of a wedding dress, Detective Garda Cathy Connolly is face with a challenge that is personal as well as professional – a challenge that has explosive consequences.

Follow Sam Blake on Twitter @writersamblake or Vanessa @inkwellhq – be warned, they get tetchy with each other!

Twenty-four-year-old Garda Cathy Connolly might be a fearless kick-boxing champion but when she discovers a baby’s bones concealed in the hem of a wedding dress, the case becomes personal.

For artist Zoe Grant, the bones are another mysterious twist in her mother’s disappearance. Then her grandmother, head of the Grant Valentine department store empire is found dead, and a trail of secrets is uncovered that threatens to shake a dynasty.

In a story that moves from London’s East End to the Las Vegas mafia, one thing is certain – for Cat, life will never be the same again.

You can purchase Little Bones HERE