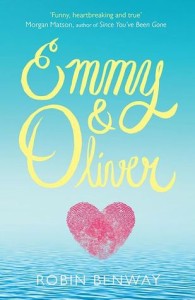 Oliver’s absence split us wide open, dividing our neighborhood along a fault line strong enough to cause an earthquake. An earthquake would have been better. At least during an earthquake, you understand why you’re shaking.

Emmy and Oliver then – a book that made me cry just because really – this is a story of friendship, love and family and is written beautifully, with a gorgeous witty undertone and is at turns sad, heart warming, very very funny and extraordinarily insightful.

Emmy and Oliver are childhood best friends – living next door to each other and along with Drew and Caro, they are fixed to each other in that way that only young children seem to be able to do really well.  Before they can come of age however, Oliver is kidnapped by his Father and the ripples of that are still spreading years later when Oliver returns…

It is actually quite difficult to describe how wonderfully engaging this is – multi-layered and full of depth, I fell insanely in love with all the characters (especially Drew it has to be said) – Robin Benway has written a genuinely exquisite little novel here that really touches the heart.

We see snapshots in time from when Emmy and Oliver were young, whilst also seeing them take their first tentative steps towards rekindling that connection now both of them are teenagers. The ten year gap means they are walking a fine line between the children they were and the adults they are becoming. Add to that the fact that Emmy, Drew and Caro have continued on without Oliver, have their own friendship language, their own dynamic, Oliver’s return makes for some great interactions as everyone tries to resettle.

Of course there is also the family to take into consideration – Emmy’s parents wrap her up in cotton wool, so much so that she has to hide her life from them to a large extent, Oliver’s family has grown while he has been away and there are a lot of other pitfalls along the way as everything is changing for a second time.

As a reader you will be right in this – it is impossible not to become emotionally involved, not to root wildly for Emmy and Oliver and their growing struggle to find themselves – the supporting cast are all so important as well to the whole and it is all so perfectly flowing that you will practically live it with them.

I adored this with true passion. I think my tears at the end were mostly because I’ve had to leave them all behind. I really didn’t want to.