Liz Currently Loves…I Am Forgotton by J A St.Thomas 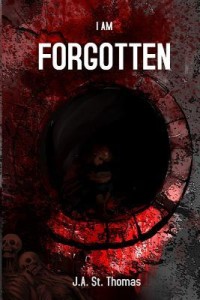 So recently I was lucky enough to win a GoodReads giveaway for the above book and I absolutely loved it! I managed to catch up with Julie St Thomas to ask her a few pertinent questions and here is what she had to say…

How did the idea for “I Am Forgotton” come to you?

My Mom had just been diagnosed with Lymphoma and was about to start treatment, we were all struggling to deal with it all and it just came to me—what if everyone was gone except for these kids under eighteen, people we technically consider children? What if you lost your family, your world, your faith that everything could be okay again? Then, what if someone gave you the chance to set it right? Could you believe them? Would you risk everything to save the ones you love? It was, admittedly, directly correlated with my feelings of inadequacy with my Mom and her illness, my feelings of helplessness and the desire to do whatever necessary to help her. Jackson was my escape from a very difficult time and he allowed me to do things in his world that just weren’t possible in my own. My Mom passed away after the book was complete but before it was published.

Jackson has a very ironic outlook on life considering what is going on around him – was he fun to write?

Jackson is a brilliant character to write, being inside his head, seeing his world through his eyes is such a gift. The way he thinks, the THINGS he thinks always had me laughing or crying—sometimes simultaneously! I think what I love about him most is that he is flawed and he knows it, he constantly tries to be a better brother, friend and hero, and while he stumbles often and makes more mistakes than he wants to admit, he keeps going, he keeps trying and ultimately, he won’t give up until he’s done all he can, despite the fact that he doesn’t feel like he’s succeeding. And all the while he says clever things and sometimes snarky things and he thinks ridiculous things and I just love him for it.

Apart from Jackson do you have a favourite character from the novel?

Yes. Sam. I adore him. He is my broken hero, my badass who doesn’t want to be alone—arguably the most innately noble and loyal character in the book.

The musical “interludes” that start each chapter are great fun. Is Music important when you are writing?

Yes, I think some of the best things I’ve put to page have come while I was listening to a favorite song or a particularly insightful lyric. I don’t always write to music but I always need something going on in the background—music, television, the neighbors brawling on their back deck, I write better with distraction. Music may not always be on while I’m writing, but it is constantly influencing it, each thing I write develops its own soundtrack as I progress through the story and I often burn the “soundtrack” to a disc and listen to it everywhere. (yeah I know you’re laughing, but my kids got the iPod budget, so yeah . . .)

One book you would like to make everyone read.

One book? Oh well, while I’d love to say I’d want everyone to read a specific book, I can’t—as individual tastes play so deeply into our reading preferences, it would most likely be counter-productive. I would love for the world to discover books that may not otherwise be discovered. Great books that will probably languish in the rankings jungle of the self-publsied race or the slush piles of agents and editors or the bargain bins of bookstores. Books that don’t have TV ads or cardboard standees or table space at B&N—those are the books I would make the world read. And I’ve totally not answered your actual question *sheepish grin*.

Spending it with the special brand of crazy I call my betrothed and offspring. I love going to a movie or the zoo with them and then coming home, lighting a fire in the hearth, an hour of zombie TV and then settling in to write with a glass of wine.

Book or tv show that is your “guilty pleasure”

The Walking Dead. It’s pretty much the only TV show I absolutely can’t miss. Does that qualify as “guilty pleasure”? I really watch anything else with any kind of enthusiasm except, perhaps, The Big Bang Theory and even that is sporadic. So Yeah, Walking Dead—zombies, flawless writing/acting and Norman Reedus—guilty guilty guilty!

Thanks so much Jules!

A violent pandemic divides what remains of the world into victims, villains and heroes. Sixteen-year-old Jackson Riley is about to find out that sometimes, under the worst of circumstances, a person can be all three.

Firstly, an incredibly difficult book to review without spoiling it but I will do my level best and we will see how I get on. And if you are sensible you will not read too much about this tale before you read it – I basically had what I’ve put above to go on before I dived in…

So. Here we go. Virus. People Die. People come back to life and try and eat the survivors. A lone teenager stands between his sister and death..and sets off on a journey to find a safe place and other survivors…meets girl along the way. So far so Generic right? Indeed. But then no. Not so much….

This reviewers opinion on why this this book is brilliant.  Its not so much that there are new idea’s here, although there are some. Its not so much that the author has found a whole new tale to tell but that she HAS found a way to tell it differently. Without giving too much away I can say that the story will lead you in unexpected directions. And then turn around and lead you down yet ANOTHER path. And well, you get the point….

Then you have the wonderful creation that is Jackson Riley – the teenager I mentioned earlier. This is his story, so you will need to love him. I see no reason whatsoever why you wouldnt. I mean the thoughts that go through this boys head had me laughing out loud upon occasion. With an ironic sense of humour and a wry eye to the ridiculous his reactions to the events going on around him are often funny, sometimes plain old “teenager” but always deeply emotional so you know they are real. I especially like the filing system he creates for his brain….

If you are feeling let down by the latest onslaught of YA/Post Apocalyptic/Teenage angst type tales that make you feel like you are reading the same book every time fear not…for now you have “I Am Forgotton”. Don’t expect miracles…we all read differently. But make sure you give it a go. Hey, its a bargain currently so the risk v benefit scenario is very high on the side of benefit..

One last thing. The author starts each chapter with a quote from the songs that inspired her during the writing process. Each one is relevant to what you are about to read, and at the end of the novel she tells you the songs they have come from. My favourite was “Your head will collapse. But there’s nothing in it. And you’ll ask yourself. Where is my mind?” (From Where is my Mind by The Pixies)