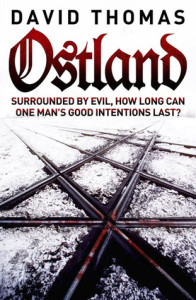 February 1941, wartime Berlin. Brilliant, idealistic young detective Georg Heuser joins the Murder Squad in the midst of the biggest manhunt the city has ever seen. A serial killer is slaughtering women on S-Bahn trains and leaving their battered bodies by the tracks. Heuser must confront evil eye-to-eye as he helps track down the murderer.
July 1959, peacetime West Germany: a pioneering young lawyer, Paula Siebert, is the sole woman in a federal unit investigating men who have committed crimes of unimaginable magnitude and horror. Their leader has just been arrested. His name is Georg Heuser. Siebert is sure of his guilt. But one question haunts her: how could a once decent man have become a sadistic monster?

This is not a particularly easy review to write it has to be said, because this novel made for extremely emotional reading but was also such a compelling page turner that its quite hard to know where to begin really.

Perhaps I’ll start with the basics – this is an intelligent mix of Crime Thriller, Historical Fiction and Fact all meshed together into one story that is at turns sad, horrific and thought provoking. Taking as it does one man, Georg Heuser, a man who in his early career tracked and captured the very worst humanity had to offer and in his later career BECAME that very thing, it was both a difficult read but one that grips and forces you to face some unpalatable truths.

There have been many books written about the Nazi’s and their “final solution” but I’m not sure I’ve read one before that has been done so well in bringing the realities of that time into such stark focus. Using a mix of  real life men and women and fictional characters to do so, the events of the story are all based in fact, the man at the heart of them was a real person, then into this mix Mr Thomas adds his well researched idea’s on the emotional details. I was at turns stunned by the horror of it all then contemplative about the lengths people will go to in order to survive. The story haunted my dreams and kept me reading long into the night – on occasion I was literally stopped in my tracks by the sheer scope of the bloodshed. Some portions make for extremely difficult reading and I often had tears in my eyes.

The story jumps between Heuser’s early days with the police and the later investigation and court case that saw him convicted of heinous crimes, you may be surprised at the ultimate outcome, it certainly shocked me. The heart of the tale of course is in the journey from decent human being to truly evil man, yet Mr Thomas manages to give him heart and soul, there were times when I felt genuinely sorry for him. Then I was horrified at myself for doing so – how on earth can there be any justification for such acts from anyone? Better to die than do such things surely, but a lot of the more gripping parts of this as a whole comes from the knowledge that not one of us knows how we would actually act when under such pressure. Therein lies the absolute brilliance of this – it will force you to ask yourself the tough questions.

Unbelievably good – terrifying and fascinating, completely addictive and really really poignant, I highly recommend this to everyone. Yes even the faint hearted – this is a story that needs to be told.