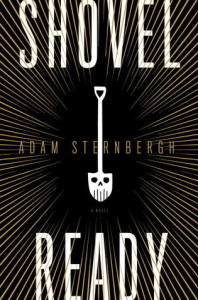 Thank you to the author and publisher for the review copy via Netgalley.

Spademan used to be a garbage man. That was before the dirty bomb hit Times Square, before his wife was killed, and before the city became a bombed-out shell of its former self. Now he’s a hitman.

I wasnt sure quite what to expect when I started this one  – the premise sounded interesting and it turned out to be a terrific story. Spademan lives in the real world while many around him live in a dream – hooked up to machines they all live lives they have chosen while outside the city rots around them. After the death of his wife in the dirty bomb, Spademan found he had a particular talent for killing. All it takes these days is a phone call and a name…he doesnt care about the reasons, he just needs to know who and where. Until he meets Persephone….

I loved the world the author has created here. In the aftermath of the bombings, many survivors deserted the area, leaving behind the destruction, but for some reason many stayed. Some to live actual real lives, others to live a virtual life of their own construct. Spademan is an intriguing character – he has his own moral code, he will not harm children as that takes a “particular kind of psychopath” but he will happily kill anyone else without knowing why. When Persephone becomes his next target however, his mindset begins to shift. Its a fascinating insight into a very troubled mind.

The world is rich with atmosphere and delightfully drawn supporting characters who all invade Spademan’s space causing one problem or the other, even when they are trying to help. There is some wonderful ironic humour here to offset the darker aspects of the story and this author is adept at creating visual images in your head as you read – imaginatively speaking this is superb.

Story flow is perfect, some beautiful writing skill and clever plot development make this an absolutely wondrous reading experience. I am secretly hoping to have more tales of this city..