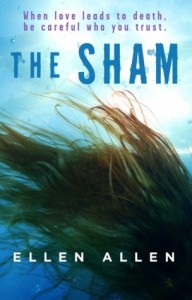 Eighteen-year-old Emily Heath would love to leave her dead-end town, known locally as “The Sham”, with her boyfriend, Jack, but he’s very, very sick; his body is failing and his brain is shutting down. He’s also in hiding, under suspicion of murder. Six months’ ago, strange signs were painted across town in a dialect no one has spoken for decades and one of Emily’s classmates washed up in the local floods.

The Sham was a book that surprised me. I expected one thing, got quite another, it was a terrifically eclectic and weirdly wonderful read exploring some haunting themes at its heart.

Emily meets Jack, a strange enigmatic character and falls for him. So much so that she glosses over his odd proclivities and rather weird ways and is willing to go a long way to protect him from the suspicions of the town. Meanwhile her own family is causing her grief, old signs are appearing all over “The Sham” and girls are disappearing..

Admittedly I was very nearly put off this one by a very violent bullying scene right at the start of it – however this was simply the jumping off point  for a really clever tale that is not all that it immediately appears to be and this scene is integral to that and important. Ellen Allen keeps the suspense going throughout – Just who is Jack and where did he come from, what is happening with the disappearances, all enthralling and engaging stuff.

Added to that we have a hint of family drama, some very well drawn characters some of whom are immensely unlikeable but still very authentic. I loved Emily, she is ruled by her heart rather than by her head a lot of the time, but its still very practically minded. There are some humerous moments to offset the dark side of the story, some of which made me laugh a lot…the jam for example, ha.

Clever writing, a weird and wonderful feel to it and a story that will take you in often astonishing directions, I thought it was terrific. It will get into your head and stay there!