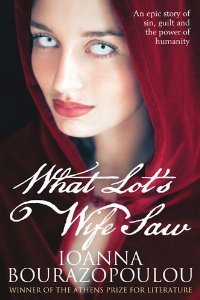 Well. What can I say. Having just finished this sprawling wonderful expanse of a novel, peppered with the most unlikely characters you will ever have the joy to encounter, and set in a future where the world we know has changed in indescribable ways, I am feeling quite honoured to be amongst the first in this country to read it. Winner of the 2007 Athens Prize for Literature, quite deservedly so in this reader’s opinion, this is post apocalyptic fiction at its best. Not only that, Ioanna Bourazopoulou has managed to write a mystery, a thriller and an adventure all tied up into one wonderful package.

Rising oceans have engulfed much of the planet and changed the landscape forever. From amid this new world a strange “salt” peppers the earth, addictive and hallucinogenic, and controlled by the mysterious “Consortium” of the 75. In their strictly controlled Colony, their employee’s live and work to a tight, unyielding rule of law, overseen by the governer and his six star bearers. When the governer is found dead, it is clear that chaos may well ensue, but what exactly are the 75 up to?  Meanwhile, away from the colony, Phileas Book creates and publishes his strange and wonderful “crosswords” made up from letters sent to The Times, until one day, approached by a representative of the 75, he finds himself thrust into the mystery of what exactly happened in the immediate aftermath of the death of Governer Bera. By reading the letters of the six, he is asked to extrapolate a theory by using his “crossword” methods…but Book is suspicious. Of the Consortium, of the Six and of the motives behind the request. Was it murder? Or even something more sinister….

This is an extremely clever story…utterly insane in its concept in the best way possible, it will have you tied up in the most amazing literary knots – and the ultimate resolution may well take your breath away. It certainly did mine, because really, despite all the information being freely available I never actually came to the correct conclusion whilst engrossed in its pages. A lot of that may well be to do with the brilliant writing – the scene setting is superb and a lot of your head will be wrapping itself around this strange new world…and perhaps even imagining what your place in it might have been. And so the author distracts you from the clues you might otherwise have picked up on – with hindsight it was all perfectly clear but I would like to bet that the majority of you will scratch your heads just as much as I did both during and after reading the book. Which you must. Don’t miss it! Phileas Book is perfect – through his eyes you will discover what went before – as one of the original survivors of the change, he leads us through the terror and the emotion – and why he now stagnates, creating his puzzles, but not really living in any real sense. The six all have their own brilliant mindsets – I wonder which you will sympathise with, hate or love….When you have read it come back and tell me. Enquiring minds want to know. This is inspiring writing – originality and the ability to surprise and delight has definitely not been lost as far as this author is concerned. I hope to see many more marvellous creations in the future.

To finish I must thank the publisher for sending me an advance copy of this novel, and I hope that the above review has done it justice. If you follow me on Twitter I will be talking about this one a lot – and pointing you in the right direction to find out more. Happy Reading!