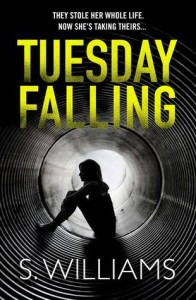 You’ve never met anyone like Tuesday. She has suffered extreme cruelty at the hands of men, and so has taken it upon herself to seek vengeance. She wants to protect and help others like her, to ease their suffering. A force to be reckoned with, she lives beneath the streets of London in the hidden network of forgotten tunnels that honeycomb the city – and this is her preferred hunting ground.

Tuesday Falling is a marvel of a read, crime fiction with a techno twist, a heroine that puts Lisbeth Salandar to shame and a piece of storytelling genius that will have you up on your feet cheering as if you were at a rock concert.

It is a revenge thriller. It is also book full of social commentary done in a way that challenges the mind. There are thrills and spills, dark violence (hence I imagine why it is marketed as an adult book despite the young adult main protagonist) but also an awful lot of humour to offset those things both ironic and simply laugh out loud hilarious.

“Tuesday” is quite simply brilliant. She has power – and I don’t mean just the power she wields in the story but the power to engage the reader in an ongoing moral argument. When the law can’t or won’t stop the bad guys just what IS a girl supposed to do? And these guys are bad. I’d rather have dinner with Hannibal Lector than be within 100 miles of any one of them. She also has another kind of power – a real sense that redemption is possible no matter what you go through..

I don’t want to give any plot details away really – not more than I have to – but suffice to say from the very first pages (that scene on the Tube is one of the best openers I have seen in a novel for years) the whole thing is completely gripping and does not let up at all. Not once. I laughed, cried, cheered and held my breath at different times during the story, a book that causes a true adrenalin rush. It is also completely authentic, much as we would like to deny it, the world that Tuesday has been harmed by is all too real. This book will make you think and it SHOULD make you think – how the most vulnerable in our society are viewed and treated is one of the biggest issues we face today. In “Tuesday Falling” the author manages to say a lot about it whilst entertaining you utterly and never once falling into the trap of preaching about it. It is simply THERE ingrained into the DNA of the drama unfolding.

It may be a thriller (gosh it really is!) but the author manages to bring a deep emotional resonance to the narrative that is haunting and deeply moving. Not only through Tuesday who is oh so broken despite her power, but with the rest of the cast of characters including our police presence, brought to life by DI Loss. A man who has seen the darker side of life, who has suffered a tremendous tragedy, one that ties him to Tuesday in ways he does not yet understand. His “sidekick” Stone brings the light relief whilst also being a brilliantly intriguing character in her own right. Really, despite all the action, this novel is character driven to the extreme – a beautiful depth to every single one of them, across the board.

There is a different London to be found here as well – Tuesday haunts the tunnels underneath the place that we know, she lives in an entirely different and gorgeously depicted world that the author builds slowly but surely as we follow along with her tale. The historical aspects are stunning, the city that Tuesday inhabits is almost a character in its own right – a really fascinating backdrop for a fascinating novel.

I really must say a HUGE thank you to Kate Stephenson from Harper Collins Killer Reads for sneakily popping this one in the post to me – she knows me too well, I loved it with a passion and without Kate it would probably have passed me by.

Overall then I guess you could say I liked this one. Just a bit. Highly HIGHLY recommended.