Who is the Lullaby Girl?

Found washed up on the banks of a remote loch, a mysterious girl is taken into the care of a psychiatric home in the Highlands of Scotland. Mute and covered in bruises, she has no memory of who she is or how she got there. The only clue to her identity is the Danish lullaby she sings…

A recurring issue for me over the last few years has been cultural identity. The little differences in attitude between countries, and the way people adhere to national stereotypes. Even down to small details like food preferences. I once offered to cook a traditional Swedish dish for my family (Flygande Jakob- a delicious comfort food), and everyone wrinkled their noses when I described its contents. Likewise when I presented British mince pies to my Swedish friends at Christmas. People instinctively trust what’s native to their country, and skirt around the unfamiliar. Yet I wonder…If a Brit had grown up in a bubble, with no knowledge of traditional Brit food, would they like black pudding straight away? Would Scots be all that bothered about haggis? Would Norwegians still choose to eat lutefisk?

It’s interesting to me that countries separated by a short plane trip can be so different, socially. You board the plane with one set of rules, and disembark to a new set. I remember flying back to Britain to visit my family (after several years in Scandinavia), and seeing British customs with fresh eyes. Suddenly, certain things seemed funny or odd. Over-politeness or forced politeness was the most noticeable British trait. It’s kind of drummed through every Brit from birth, and I never questioned it until I’d spent several years with the more straightforward Scandi style of conduct. Also, the avalanche of signs telling you you’re not allowed to do things… ’Don’t walk on the railways tracks.’ ’Don’t stand on the grass.’ ’Don’t stick your arm out of the window.’ ’Don’t feed the birds.’ ’Don’t lean on the counter.’ ’Don’t electrocute yourself on the highly electrical thing.’ My ex found those signs hilarious, and after a while I came to share his way of thinking. Yet I didn’t quite fit into Scandinavian culture either. Even after seven years there I felt like an outsider, and I’m sure that was due to the British values I grew up with. When I was homesick for Britain I’d seek out stereotypically British food items or TV shows. Now, when I’m homesick for Norway/Sweden, I seek out stereotypically Scandi things. At Christmas, I still miss Julebrus and pepperkaker. It’s a strange limbo I’ve ended up in, really. Both places are dear to me, yet I feel I don’t belong to either.

My Review of Lullaby Girl… 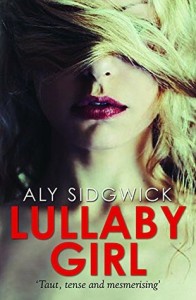 Lullaby Girl is a tense and claustrophobic psychological thriller, the kind I love where the story is told in both past and present, setting the scene and building you up to those reveal moments that make you gasp..

The “Lullaby Girl” of the title, Kathy, is a mess – washed up onshore, unsure who she is or what has happened to her, at the start of the novel she has reverted to a child like state that, as she talks, is very disconcerting. Fixated on one particular member of the care home she ends up in, she is constantly on edge and scared of everything. Slowly but surely she begins to gain her feet but it is a hard and scary journey as she starts to remember the past.

The author builds the tension beautifully and there is a haunting aspect to the writing that keeps you on edge and right beside Kathy as she confronts her demons. Kathy as a character is intriguing and often frustrating as she hides herself away, seen through her eyes the whole world and everyone in it is a menacing place where there are no places of safety. The reasons for this become apparent as she moves towards recovery…

Difficult to review the story aspects without giving anything away, suffice to say it is cleverly constructed to keep you involved all the way – Aly Sidgwick  has a gorgeous way with words, descriptively lovely even through this dark story, the environment that Kathy is in comes to life around her and the further you get into it the more fascinating and often scary it becomes.

Overall this is a terrific book for fans of psychological thrillers – taut, intelligent and thought provoking, this comes highly recommended from me.