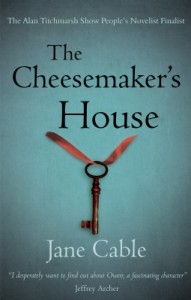 So I was recently lucky enough to get to read a lovely little ghost story from Jane Cable called “The CheeseMaker’s House” – review to follow – and I caught up with Jane and asked her a few questions. Here is what she had to say.

Can you tell us a little bit about the background to the story and the house that inspired it?

The Cheesemaker’s House is in the beautiful North Yorkshire village of Great Fencote and when my husband and I bought it in 2007 we had every intention of moving there but for various reasons it didn’t happen. The previous owners gave me a lot of paperwork to do with the history of the house and as well as having been built by a woman – the village cheesemaker – in 1726, I noticed how many women had owned it down the years. That started me wondering what sort of woman might move there now, and what might happen to her.

Both Alice’s voice and the beginnings of Owen’s character had been in my head for a while but in a completely different context. Taking them to Yorkshire seemed to make them gel, and when I read about charmers while I was researching rural life in the eighteenth century the story started to fall into place.

I related to Alice a lot, is she based on a real life person?

Some people who know me have said that when they read some of the things Alice says they can hear me saying them, but I guess that’s inevitable. The reality is that there isn’t a great deal of me in her – but she isn’t really anyone else either. I think there are parts of Alice that most women can relate to; her vulnerability; her spirit; the way she tries to make sense of her world. I hope so, anyway.

Now that’s hard. As a writer I think you always have to fall just a little bit in love with your hero and whether or not there’s a little magic at work I can certainly see what Alice sees in Owen. On the whole, though, my favourite character is Alice. As the entire book is written from her point of view I had to get to know her really well and by the time I’d finished writing and editing it, she had almost become a friend.

I am very fond of the Alice the cheesemaker too. She has quite a back story, which is only partly revealed in the novel. She went through hell and high water with her passion hidden by a stoical acceptance of what had to be. She certainly deserved to be able to rest in peace.

It isn’t a ghost story (although I have just started to write another one), but it is a suspenseful romance. It has the working title of The Fairy Tree and is inspired by an actual tree on the banks of the river Hamble near Southampton. In the book a couple meet again after twenty years to discover that memory is not quite what it seems. I’m currently going through the editing process myself – which I love – before handing it over to a professional editor who will doubtless tell me to re-write it.

Coffee, tea or something stronger?

All of the above. A skinny latte first thing in the morning – when I do most of my writing, decaff tea during the day and a glass of wine to unwind in the evening. A real treat is a mojito, made with mint from our garden.

I normally write first thing in the morning, because that’s when I’m at my best. I normally write at my desk. I like to have a skinny latte to hand (see above). But basically I can write any place or any time I feel like it or need to get on so I’m very lucky in that respect. It’s tiredness that’s the real killer; my brain just doesn’t want to work when I’m exhausted. But no real writing habits, no.

Well I think I can have the bible anyway, can’t I? So the book I would choose would be an enormous blank one so that I always had something to write in. Although ‘101 Uses for a Coconut’ would probably be much more practical. Oh, and if I could swap the Complete Shakespeare for the Complete  Angler…

E-Reader or Physical book?
I’m in transition at the moment. My husband bought my an iPad for my birthday and I had always promised Madeleine Reiss, who I met through the Alan Titchmarsh Show competition, that her winning book Someone to Watch Over Me would be the first one I downloaded. I’m on my fourth or fifth e-book

When Alice Hart’s husband runs off with his secretary, she runs off with his dog to lick her wounds in a North Yorkshire village. Battling with loneliness but trying to make the best of her new start, she soon meets her neighbours, including the drop-dead gorgeous builder Richard Wainwright and the kindly yet reticent cafe owner, Owen Maltby. All is not what it seems however. Why does she start seeing Owen when he clearly isn’t there? Where – or when – does the strange crying come from?

I was very much looking forward to this one – having not read a good “ghost” story for a while,this seemed like the perfect remedy. And it was…

As we start following Alice on her journey, I was immediately involved…it probably helped that Alice is a lot like me at her heart – not sure where life is going to take her, suffering the loss (albeit not death) of her Husband and just trying to find her way. Enter the roguish Richard and the enigmatic Owen, throw in some strange occurrences with a hint of history and you have a great mix for a great story.

Slowly drawing you in, at times you may wonder if Alice is a bit barmy (again I relate as I often wonder that about myself!) as she starts to see Owen all over the place when he is not actually there…and her nights are often filled with a strange “crying” sound that she cannot track down. Spooky, yes. And beautifully written so you are right there with her..

As she delves further into village life and discovers more about those around her, so the true story emerges…and its a compelling one. Apart from that I will not say…but if you like a good ghostly tale you will certainly enjoy it.

Some great characters in here -Alice of course, I also particularly loved Adam and trust me, you will want some of his baked goods. In the background of the tale a distinct snapshot of life in a place where everyone knows everyone else and secrets are hard to keep..

All in all a terrific read and one to curl up under the duvet with and hope that you don’t start hearing strange noises in the night….