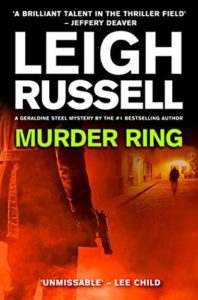 Today I’m very pleased to welcome Leigh Russell to the blog, talking about her latest novel Murder Ring and all things Geraldine Steel.

First things first: why did you decide to tackle gun crime in the latest GS title?

In the beginning of her series, Geraldine Steel works in Kent. In the fourth book, Death Bed, she relocates to London. Murder Ring is the eighth in the series, and her fifth investigation set in London. With four books set in London, there was a limit to how long I could continue writing about a detective in North London, without ever mentioning guns. Reluctantly, I decided to tackle the issue. It turned out to be more complex than I had realised. And of course the problem lies not with the weapons themselves, but with the kind of people who get their hands on them. Far from evil master criminals, they are all too often dysfunctional adults, or very young, either way incapable of making responsible decisions. This is a growing problem today. I’m not sure what can be done to control the problem, but it’s important to raise it as an issue, which crime novels like Murder Ring do.

There are quite a few despicable characters in Murder Ring, which one did you enjoy writing the most (if any)?

All of my characters are enjoyable to write, but the ‘baddies’ often tend to be the most interesting characters to work on. I think this is because bad characters give a writer licence to do anything. Where my detectives’ actions are constrained by law and morality, my villains are free to do or say anything at all, with no restraints at all. And there are no limits to the number of ways in which a character can be bad, which gives scope for endless creativity!

Geraldine Steel makes a big discovery in this case thanks to modern technology. How do you keep up to date with the techniques the police uses?

Forensic technology is advancing all the time. Sherlock Holmes with his magnifying glass was outstripped a long time ago although, as with the magnifying glass, modern technology relies on someone to view and interpret the findings. Many crime writers complain that this makes their job more difficult, but I find it can be really helpful. As a crime writer, I do my best to keep abreast of progress in forensics, not only because I’m keen for my books to remain as authentic as possible, but also because such developments can be inspiring. As I was puzzling over how to resolve the investigation in Murder Ring, I was conducting some research and came across a new technique in forensic science which solved my problem perfectly. I can’t say any more without risking spoiling the story for anyone who reads it, but I can tell you that I was very pleased to have discovered a way for Geraldine to work out the identity of an elusive killer.

Geraldine Steel also makes a big discovery in her personal life. What is the most challenging part of having two narratives (one that extends through the series, and another that starts and ends with each book) and what advice would you give to other writers who would like to take this approach in their stories?

The challenge of writing a long running series is to write each novel so that it works as a standalone, while also continuing the series. I’m always aware that while many readers are following Geraldine’s story through the series, many others may pick up one of the books without having read the earlier ones. I want all my readers want to enjoy my books, so in a sense I’m writing for two audiences. It isn’t very difficult, but does need thought. My advice to other writers would be to plan the whole series right from the start. I had no idea my debut Cut Short would be published at all, let alone be the start of a long running series, so Geraldine’s story is developing as the books are written. It’s probably more fun to make it up as I go along, but it does make the series more challenging to write.

You’ve written 12 books (and counting!) and still manage to surprise your readers with twists and turns. Do you have any tricks up the sleeve?

With 12 books published, that means I’ve actually written nearly 15 now, as the editing process takes a while. And you may have realised by now that I’m avoiding answering the question, because I’m not about to give away any secrets about what I have up my sleeve.

What’s next for Geraldine Steel?

I’m currently writing the ninth Geraldine Steel, to follow Murder Ring. It’s difficult to talk about what happens in the next story, without giving away too much about that story, and also about Murder Ring. But I don’t think it’s too much of a spoiler to tell you that Geraldine will be pursuing killers in both!

Thank you to Leigh and her close questioner, Alex Creixell of Oldcastle Books.

Hearing footsteps pounding along the street behind him he glanced back, fleetingly worried, then laughed because the street was deserted. All the same, he felt uneasy. Everything looked different in the dark. Then he heard more footsteps approaching, and a hoarse voice called out. Turning his head, he made out a figure hovering in the shadows and as it raised one arm, the barrel of a gun glinted in the moonlight… The dead body of unassuming David Lester is discovered in a dark side-street, and DI Geraldine Steel is plunged into another murder investigation. The clues mount up along with the suspects, but with the death of another man in inexplicable circumstances, the case becomes increasingly complex. As Geraldine investigates the seemingly unrelated crimes, she makes a shocking discovery about her birth mother.

Find out more about the series here: 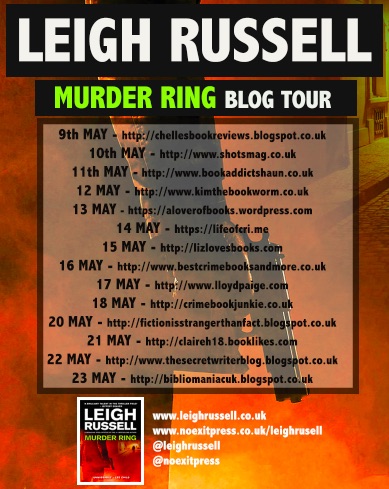