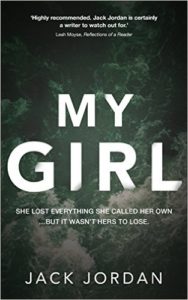 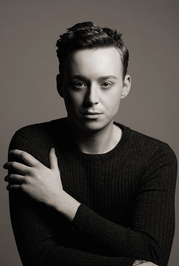 Today I am very happy to be part of the blog tour for Jack Jordan’s new novel My Girl. A little  taster in the form of the first chapter. Review to follow upon release.

To celebrate the worldwide release of my second thriller My Girl on 4th July, I am sharing the first chapter exclusively via Liz Loves Books.

Paige Dawson: the mother of a murdered child and wife to a dead man.

She has nothing left to live for… until she finds her husband’s handgun hidden in their house.

Why did Ryan need a gun? What did he know about their daughter’s death?

Desperate for the truth, Paige begins to unearth her husband’s secrets.

But she has no idea who she is up against, or that her life isn’t hers to gamble – she belongs to me.

For the first few seconds after she woke, Paige Dawson lived in a world where her husband Ryan was snoring lightly beside her, and her daughter Chloe was sleeping peacefully in the next room. When reality slowly trickled in, she instantly wanted to return to sleep – to forget they were dead – to stop the tears from rolling down her cheeks.

As her eyes adjusted to the room, she coughed violently. Stale smoke sat in the air. Worn clothes lay crumpled on the living room floor, smelling of damp and old sweat. Cigarette ash had been trodden into the carpet. A photo frame faced the ceiling. Ryan smiled from behind the cracked glass; a time when he was happy – before he slashed his wrists.

Get up. You need to get up.

She reached down to the carpet and patted around the mess in the dark until she found the tray of tablets. It shook in her hands as she popped each pill through the foil: one, two, three. She placed them on her dry tongue, picked up the half-empty wine bottle from the floor and took a swig. The wine was warm, but it did the job. The diazepam would kick in soon.

As she sat up, pain exploded in her temples. She lit a cigarette, cringed with the first toke, and stared at the daylight creeping from behind the closed curtains. The real world was taunting her: you can’t hide away from me forever.

The smell of sick filled the house. How long it had been in the house with her: a night? A week? She wondered if there would be blood in it again.

What would Chloe think if she saw me like this? Chloe would have been twenty-four years old by now. Her severed arm had been found in the river, her fourteen-year-old fingertips breaking through the surface. They never found the rest of her body, nor did they find the person who killed her. The forensics team had tested her blood: she had been alive when her murderer began chopping her up.

The diazepam wasn’t working fast enough. She could still feel the painful void in her chest; she could still see her husband’s blood swirling around in the bathwater. If she closed her eyes, Ryan’s lifeless eyes flashed in front of hers.

She snatched the packet of codeine from the side table and swallowed two tablets with more wine.

When she lifted the cigarette to her lips, she found it wasn’t there. She peered over the edge of the sofa and saw the cigarette burning a black hole into the carpet.

Maybe the diazepam is working.

She picked up the cigarette, spat on the blackened carpet, and gave it a rub with her finger, as though she had kissed a child’s plastered graze. There. All better.

She spotted Ryan watching her from the mess on the ground, his lips frozen in an eternal smile.

She shook the thought from her head and stumbled into the kitchen.

The bin was bulging with weeks of waste. Empty wine bottles lined the wall by the back door. Loud, languid flies buzzed around in hopeless circles. An uneaten meal sat in a pan on the stove, discoloured and congealed. She couldn’t even remember cooking it, let alone forgetting to eat it.

The last time she had looked into Ryan’s eyes while he was alive, he had been pinning her to the floor with his body as he forced a slice of bread into her mouth. His frustrated tears fell onto her face as he begged her to eat. He only stopped when the bread lodged in her throat. He had freed the blockage with fingers bent like a fishhook and then, as she gasped for air, he had sobbed from where he lay on the carpet, with bits of bread and saliva coating his fingers.

She wasn’t starving herself – she just forgot to eat.

The sound of the key turning in the lock made her jolt. Her mother-in-law gasped. Shame turned in Paige’s gut.

Greta stood in the doorway with her eyes on the mess.

‘I was about to clean up,’ she replied as she returned to the living room.

Greta placed her bags by the door. She looked reluctant to close it, to say goodbye to the fresh air, but when she did, it slammed.

‘How could you let it get this bad?’

Greta threw open the curtains. Paige squinted as daylight burst into the room.

‘Are those burns on the carpet?’

As Greta rifled through the mess, Paige wondered how the woman before her held herself together. Her hair had been set at the salon, her make-up was perfect, her clothes were ironed and fresh. No one would have known that her only son had committed suicide just two months before.

‘I expected better from you, Paige.’

Paige glanced at herself in the mirror above the fireplace and saw greasy auburn hair, streaks of mascara hardened on her cheeks, the stained nightgown stuck to her body with sweat. She looked older than her forty-two years.

‘I don’t know why, but I had a feeling you might have changed the locks.’

Greta spotted the photo of Ryan, hidden beneath the cracks in the glass. She sighed and took it in her hands. For a moment her frown disappeared, and she looked almost beautiful. She stood the photo frame

on the coffee table and looked back to Paige. The frown immediately returned.

‘Not up to cleaning yet?’ Greta asked, as she picked up her bags and carried them into the kitchen.

‘I’ve got other things on my mind,’ Paige replied, following her into the kitchen.

‘Shall I? I’ve done your food shopping, so I might as well do your cleaning.’

Paige held her resentment back. ‘I was just heading out.’

She looked Paige up and down again.

‘I will clean while you’re out, then.’

‘If that would please you, Greta.’

‘It would. Ryan would want me to look out for you.’

Greta looked around the mess for other aspects to criticise. Paige waited patiently, longing to be alone.

‘Are you sleeping on the sofa?’

‘Imagine if one of your neighbours should walk past and see you.’

Greta went into the living room to stare at the mess again, lost at where to start. Paige followed behind her.

‘I don’t care what people think of me.’

‘Clearly. I can’t remember the last time I saw you clean and dressed.’

‘That’s the thing with being a widow, you focus on the death of your partner, rather than what people think of you.’

They stared at each other, like two cats about to fight. They stood in silence for a while, their eyes locked.

‘You said you were off out?’

‘Dr Abdullah is a Christian, too, I believe.’

‘Really? Still, I prefer Sally. She has a kind air about her, and presents herself well.’ Greta looked her up and down as she spoke.

‘Yes. I’d better start cleaning, before this place becomes infested with rats.’ Greta picked up an ashtray from the coffee table. ‘Must you really smoke in the house? Ryan would have never allowed it.’

Greta flinched, but held her tongue.

‘Thanks for the food,’ Paige said, and made for the stairs.

The moment she got upstairs, she turned on the shower and retrieved the bottle of wine she had hidden under her bed. She certainly wasn’t going to step out into the real world without help.

Paige returned to the bathroom and locked the door behind her. She peeled off the nightgown that stuck to her like a second skin, sat on the toilet and drank wine straight from the bottle as steam filled the room. She stared at the bath and saw Ryan’s lifeless body lying in the red water, his vacant eyes locked on hers. Paige clenched her eyes shut and shook her head.

When she opened her eyes again, the bath was empty. Ryan was gone.

She checked her urine: blood again. She flushed the blood from the toilet, and the thought from her mind. She couldn’t think about that right now.

As she breathed in the thick, hot mist, and drank warm wine from the bottle, she began to cry silent tears: she could never escape the fact that she was the mother of a murdered child and wife to a dead man. 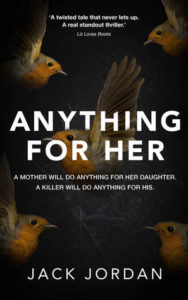 Louise Leighton’s life has fallen apart, all because of one fateful night. Her husband is an adulterer, her sister is his mistress, and soon, Louise will lose everything she owns. But she never imagined she would lose her daughter.

Eighteen-year-old Brooke Leighton is missing. It’s up to Louise and the Metropolitan Police to find her. Has Brooke run away? Or has she been taken against her will? And can Louise aid the investigation without mentioning the night where all of her troubles began?

You can order Anything for Her HERE