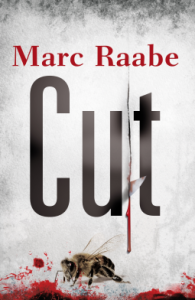 A boy is witness to a horrible crime. Decades later, his girlfriend is kidnapped by an insane serial killer. To save her, he must return to the events of the past. But how can he remember when forgetting was the only way to survive?

Gabriel’s job as security guard takes him to a derelict mansion in Berlin late at night. The obscure scene there reminds him of the most terrible night of his life – the night his parents died. Soon after, he receives a desperate call. His pregnant girlfriend Liz is being attacked and cries for help. Gabriel alerts the police but they arrive too late. Liz has disappeared without a trace. The hunt for her turns into a frantic chase against time. The terrifying man from the past has returned and will not stop until Gabriel is completely destroyed.

Cut is described as “The serial killer thriller that took Europe by storm” – well I can see why because it is intensely creepy, with some memorable characters and a really dark undertone to the writing which gives it an atmospheric twist that is truly addictive.

Cut is both a serial killer thriller and a fast paced race against time,with some beautifully placed reveal moments and a real sense of urgency to it when it comes to Gabriel’s ability to track down his missing girlfriend and save her from a monster.

One thing I loved about Cut was the bad guy was truly a bad guy, Marc Raabe managing to create a certain depth to that character whilst obscuring the motivations behind the actions really right up until the last minute. It is unpredictable which makes it fun (and sometimes horrific) I was often struck by a moment, there are some descriptive scenes that linger with you.

Cut was a fast read for me – one I enjoyed all the way through, the past/present vibe which I always enjoy in novels was done really well, some great writing here and a stonking good story. Serial killer thrillers are thinner on the ground than they used to be – Cut fills that gap nicely with one that has many levels.

You can purchase Cut by clickety clicking HERE