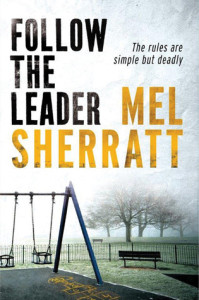 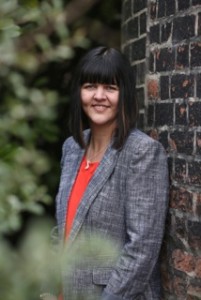 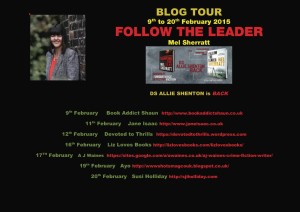 Today I am VERY happy to join the Blog Tour for Mel Sherratt’s “Follow the Leader” in which DS Allie Shenton returns to solve another case. Mel very kindly wrote me a lovely article all about it. This is followed by my review of the book – Enjoy!

Most people know the story around my novel Taunting the Dead and it hitting the Kindle bestsellers list in 2012. It was also the eighth bestselling KDP ebook of that whole year. I, for one, was staggered – even more so because I’d been trying for years to get a traditional book deal to no avail. So what was it about that book? Was it timing? Was it finally being in the right place at the right time? Was it the pricing strategy I used? Or was it because the book was just that little bit different?

When I set out to write Taunting the Dead, my main character Allie Shenton was going to be a family liaison officer. I’d read an article that had peaked my interest about a FLO falling in love with a murder victim’s wife. I read up more about transference –a phenomenon characterised by unconscious redirection of feelings from one person to another. But as I wrote more of the story, it became clear that Allie would be served better as a detective sergeant and be investigating more people than just the family.

As well as this, a lot of fictional detectives that I was reading about were either alcoholics, divorcees or going through rough patches, or single, unhinged and angry. Now as writers we all know that we couldn’t write about normal, happy cops because there wouldn’t be any tension in the stories – our main character would be dull. So to fit the story that I had decided on, I wanted someone who was in a good stable marriage that could be tested. I wanted Allie’s ‘flaw’ to be that she was attracted to someone that she shouldn’t be. So in Taunting the Dead she has been happily married to her husband Mark for fifteen years.

I’m sure most people at some time during their life have had an attraction to someone who they shouldn’t. Someone somewhere will turn our heads, our stomach will flip over, our inner Goddess (or God) will go phwoaarrr and we’ll be off with the fairies. Yet how many of us would actually act on that feeling? Maybe if someone was having a hard time with their current partner, or if they felt like they were stuck in a rut, and needed a little excitement, they might go for it. But most of us wouldn’t – we’d get through it. We’d do this by reconnecting with the person we’re unhappy with, or finishing a relationship and moving on.

Looking back, when Taunting the Dead was in the top 3 in the overall UK Kindle store in 2012, it was bouncing around with the novel Before I Go To Sleep. I might be wrong, but it feels to me that S J Watson’s book was the start of the era of the unreliable narrator. Ella, one of the main characters in my standalone psychological thriller, Watching over You, is very much like this too – although she writes in a diary and tells of her past, how much do we think is made up as opposed to how much is reality?

So maybe Taunting the Dead is an unreliable narrator book too, so be it with multiple characters. Steph Ryder certainly isn’t likeable. Most of the characters were lying to each other as well as lying to the police, and they weren’t necessarily pleasant characters either. Plus Allie had a crush on a bad guy so she had her flaw too – depending on whether you agree with affairs or not. That was one of the dilemmas in Taunting the Dead – did she or did she not go too far to get to the truth…

Taunting the Dead has been a standalone book for three years. When I got a publishing deal for it, it was then that I decided to write two more books about Allie. Each book has a standalone crime that is solved but there is a sub-plot that starts in Taunting the Dead, goes through a little into book two, Follow the Leader, and is resolved in Only the Brave, book three, which is out in May. Yet a strange thing happened. By the end of these three books, Allie got under my skin so much that I’m now halfway through the first daft of book four with plans for two more.

In Follow the Leader, we see Allie battling with her demons. She knew she was too emotionally involved in the case of Steph Ryder’s murder, so she has some confidence building to do. She needs to stay on the good side of her husband, her colleagues and her boss, plus she is still struggling with the work/life balance because the man who attacked her sister and left her for dead is still out there. She also has a serial killer to catch…

A man’s body is found on a canal towpath. In his pocket, a plastic magnet in the shape of an E.
Days later, a second victim is found, this time with the letter V tucked into her clothing.
As the body count rises, the eerie, childlike clues point to a pattern that sends DS Allie Shenton and her colleagues into full alert.

I adored the first Allie Shenton novel – Taunting the Dead- so I was very happy when Mel Sherratt decided to revisit the character in “Follow the Leader” and what we have is a fast paced, intuitive and realistic police drama featuring a terrific main protagonist.

Follow the Leader is not a whodunnit, it is a whydunnit which often is much more interesting and certainly was so here. Dealing with themes of bullying and peer pressure, Mel Sherratt explores the extremes to which such behaviour can affect a life, creating a character who has been pushed over the edge. As Allie and co try to track a killer, we get to see his processes and thoughts, find out about his background and his motivations – this makes for some exciting reading and gives the whole thing a highly addictive quality.

Offset against that, Allie Shenton herself is given a lot more depth, we get a much deeper insight into her personality and background. She has issues – these were given a voice in “Taunting the Dead” but now we have a chance to really dig a lot deeper and find out more about her – she doesnt always make great choices as we discovered in Book One but the reasoning and emotional resonance behind how she is is terrifically well drawn here.

Mel Sherratt has a brilliantly readable writing style, a very definite ability to create characters you care about and give them true psychological depth, whilst at the same time constructing an intelligent and well imagined situation to put them in – constructively speaking this is excellent and will keep you turning those pages to find out what will happen.

I loved this and I am so happy that Allie will be back again – definitely comes highly recommended from me. 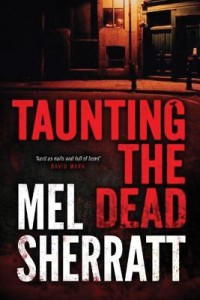