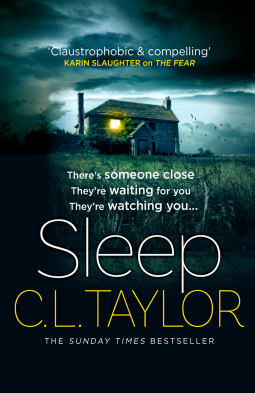 All Anna wants is to be able to sleep. But crushing insomnia, terrifying night terrors and memories of that terrible night are making it impossible. If only she didn’t feel so guilty…
To escape her past, Anna takes a job at a hotel on the remote Scottish island of Rum, but when seven guests join her, what started as a retreat from the world turns into a deadly nightmare.
Each of the guests have a secret, but one of them is lying – about who they are and why they’re on the island. There’s a murderer staying in the Bay View hotel. And they’ve set their sights on Anna.
Seven strangers. Seven secrets. One deadly lie.
Someone’s going to sleep and never wake up…

I have to give this top marks because reading Sleep genuinely meant that I had none over the night I read it. Well perhaps a little bit after I finished it bleary eyed at around 3am.

I’m still very fond of the psychological thriller, despite having read so many, both excellent ones and also some truly terrible ones – but this author never fails to entertain me, whether it’s by writing those characters I love to hate, or as in this case with a twisty page turner that doesnt loosen it’s grip once you start.

The theme of guilt is central to “Sleep” as is the underlying thread about how we deal with loss. Anna, our main protagonist, is drowning in both in the aftermath of a terrible accident. Trying to find a way to recover, she immerses herself in a new job – but someone has followed and the remote location is about to be cut off from civilisation by a raging storm…

I loved it. I’m a huge fan of claustrophobic settings, a locked room mystery feel where there are only so many suspects. It keeps things predictably unpredictable, this is beautifully plotted so you may guess but you can’t know until the final reveal…making the read of it both edgy and intriguing.

The very definition of a page turner “Sleep” has a great cast of characters, a fascinating group dynamic, a couple of game changing moments and a tense, clever finale.

I actually think this is my favourite yet. Despite the lack of sleep…

Highly Recommended for fans of this genre. Top notch.

You can purchase Sleep (Avon) Here.