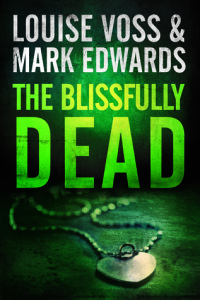 She couldn’t believe that he wanted to meet her. He was famous. She was a nobody. Finally, someone could see how special she was…

When the body of a teenage girl is found in a London hotel, DI Patrick Lennon is mystified. Nobody saw her or her killer enter the hotel, and there is no apparent motive—until a second teenager is found and Lennon realises somebody is targeting fans of the world’s biggest boy band.

As Lennon struggles with both his home life and his rivals on the force, the pressure to catch the killer before he strikes again reaches fever pitch. And when Lennon makes a terrible mistake that ends in disaster, he finds himself in a race to save not only the lives of more teenage girls but also his own career.

The Blissfully Dead is a truly terrific read. Not that I was expecting anything less from the dynamic duo of crime writing Edwards and Voss but still..truly terrific.

So two things – firstly the concepts explored in this, the second novel to feature DI Lennon, are timely and relevant and have the trademark creepy vibe that comes over in all the books. A famous band,  their fans and someone who really doesnt appear to LIKE said fans. Social media comes into play, themes of obsession and online drama (we all have online drama) and this story of our modern times has an amazing level of authenticity about it.

Secondly DI Lennon himself is probably one of the more original detectives flitting about in the wonderful world of crime fiction right now (and I do love my crime fiction) In The Blissfully Dead he is facing down some demons of his own, but they are most certainly HIS and not an amalgamation of every other detective you’ve read about ever. This I like. It just makes things so much more interesting and creates in Lennon a truly fascinating character that you feel you ACTUALLY need to get to know. On that note lets hope for more books in this particular series. Yes I am glaring at the two people responsible…

The mystery element is also brilliantly done. Twists and turns all the way whilst never losing focus on the point of it all. A disturbing look at the darker side of the entertainment industry and an even more disturbing wake up call about the dangers teenagers can face in the sometimes seemingly passive world of social media. The depth of perception in the writing makes it incredibly relateable as  to the issues raised and the two authors pull off that not always easy feat of balancing observation and social commentary with high levels of entertainment.

The thing about the Edwards/Voss partnership is that all their novels are so eminently readable whilst still having that depth of emotional resonance that keeps you going back for more and never being sure what you might get – apart, of course, from a stonking good read.

I’ve stalked Mark and Louise (in a relevant way to their latest novel of course rather than in a Kathy Bates type fashion) and have persuaded them to answer some questions for me – which they will as soon as I come up with them after the read has settled for me. So look out on the blog after release date for that – something to look foward to as this pair are great fun to hear from.

Mark can be found lurking on Twitter here: https://twitter.com/mredwards

Louise hangs out there too.  https://twitter.com/LouiseVoss1