This page for reviews of the latest books in series I follow. New addition page 06/03 work in progress.

Eight years ago, Sharlah May Nash’s older brother beat their drunken father to death with a baseball bat in order to save both of their lives. Now thirteen years old, Sharlah has finally moved on. About to be adopted by retired FBI profiler Pierce Quincy and his partner, Rainie Conner, Sharlah loves one thing best about her new family: They are all experts on monsters.

Is he a killer?

Then the call comes in. A double murder at a local gas station, followed by reports of an armed suspect shooting his way through the wilds of Oregon. As Quincy and Rainie race to assist, they are forced to confront mounting evidence: The shooter may very well be Sharlah’s older brother, Telly Ray Nash, and it appears his killing spree has only just begun.

All she knows for sure: He’s back.

I’m a huge fan of the Quincy/Rainie series and have missed them so much, so I was SO HAPPY to find that the new novel from Lisa Gardner revisited that pair and now they have a family…

Obviously they are not going to have a traditional one, in this case they have fostered and are adopting Sharlah, a girl who has a difficult and emotionally traumatic past to deal with. When her brother returns to the scene things get dangerous, luckily for her, she has unequally qualified parents.

This was brilliant – just as addictive for me as the previous books in this series and reading Right Behind You has sent me on a mission to read the previous stories again. Quincy and Rainie have come a long way over the years and whilst I do love the DD Warren series and the rest, I will always have a soft spot in my heart for these characters and Lisa Gardner has not let me down in the new novel, weaving a tense and fast paced tale with the usual twisty goodness and her intuitively great eye for dramatic character development.

Whether Telly is saint or sinner makes up a big part of the mystery, we hear from Sharlah and it is cleverly engaging and emotional stuff. Meanwhile Rainie in her new role as mother and mentor tries to keep her family safe and Quincy in his usual style sets off to solve the dilemma that is Telly’s character and motivation. It is gripping stuff from first page to last.

Highly Recommended. As are all the others. I have not had a bad read from Lisa Gardner yet.

You can purchase Right Behind You HERE 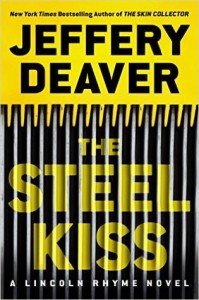 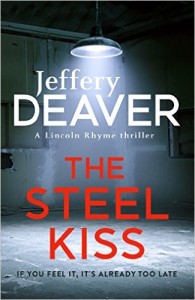 Amelia Sachs is hot on the trail of a killer. She’s chasing him through a department store in Brooklyn when an escalator malfunctions. The stairs give way, with one man horribly mangled by the gears. Sachs is forced to let her quarry escape as she jumps in to try to help save the victim. She and famed forensic detective Lincoln Rhyme soon learn, however, that the incident may not have been an accident at all, but the first in a series of intentional attacks. They find themselves up against one of their most formidable opponents ever: a brilliant killer who turns common products into murder weapons. As the body count threatens to grow, Sachs and Rhyme must race against the clock to unmask his identity–and discover his mission–before more people die.

I love Lincoln Rhyme. It is a series I have been in from the start, never missed one, never been disappointed although as with any series it has had its ups and downs and my favourite is still “The Vanished Man” even after all these years  – with The Steel Kiss Jeffrey Deaver is on top form once more though and I thoroughly enjoyed this one and inhaled it in a couple of sittings.

Here Lincoln has retired from the criminal side of things (WHAT?  I hear you cry – do not fear, he just can’t help himself) but when Amelia asks him to use his particular talents in a civil case he gets caught up in a race against time against a formidable killer.

I like these because of the forensic angle, done so well  in a fascinating way every time, in this case with bells on as Jeffrey Deaver brings a slightly different  focus to things and adds in a new character who I grew very fond of. As well as the case in hand we have Ron getting INTO trouble, Amelia running around the streets looking FOR trouble and the usual fast paced mayhem interspersed with the science and technology. Its a great mix and makes for a great read, giving your brain cells a workout and your heart a bit of a run for its money.

I especially enjoyed the “killer” asides,  an intriguing look into an intriguing mind, but as always Lincoln is the character that fascinates the most, especially his relationships with those around him, with every novel the insight gets deeper and still he can be unexpected.

A great cast of characters and some great storytellling. Not sure what more you could ask for really.