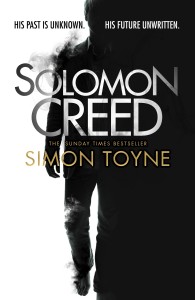 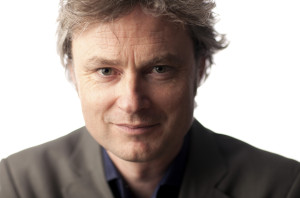 Photo by Toby Madden USE

Today I am VERY happy to have Simon Toyne on the blog answering a few questions on “Solomon Creed” a novel that has been described as the Thriller of the year. I can’t really argue with that…So here is what I asked (and what he answered rather brilliantly I thought) and following that is a little review of the book from me.

Solomon Creed kicks off a new trilogy for you – tell us a little about the inspiration behind this one.

It’s actually a new series, not a trilogy, though I had the idea for it in the middle of writing The Key, second book in the Sanctus trilogy. I always seem to have my best ideas in the middle of something else. It started as a one line idea about a man who has to save a series of souls in order to ultimately save his own. About a year or so after having that idea I happened to re-watch the Wim Wenders film – ‘Paris, Texas’ – and during the opening sequence (have a look here) I thought to myself ‘That’s how that story should start. A man walking out of the desert wearing a suit.’ I ended up listening to the Ry Cooder soundtrack of ‘Paris, Texas’ all the way through writing Solomon too. It became one of his themes.

Although in a very different way from Sanctus, there is a religious theme running through the narrative – does this subject hold a particular interest for you?

I do find religion, particularly the stories woven into it, endlessly fascinating. If you look at the origins of all the older religions they were all about trying to make sense of unfathomable things and posing the big existential and philosophical questions like who am I, why are we here, what does it all mean? When I’m writing a novel and pushing my characters around the page with a pen I’m dealing with all these same questions, so the two work very well together. I also think they resonate with readers because we’re all still trying to figure out these same questions.

On the topic of trilogies and series fiction in general, moving forward will this be your preferred method? It does allow for a wider scope.

It does and that’s why I like it. The Sanctus trilogy was very much rooted in the city of Ruin and the mysteries it contained, it was the pivot around which everything else revolved. With Solomon, he is the central mystery and he can go anywhere. That was one of the things that appealed to me about him, that I can continue his story towards his own redemption and colour in his backstory as we go along whilst at the same time setting each new book in a totally different setting. As a writer it gives me the best of both worlds – familiarity and a long-form unfolding story, but also novelty. I hope that will appeal to the readers too.

All your novels so far have had a high addictive quality – how difficult is it to walk the line, creating a thriller that gets the heart pounding yet still has great depth of plot and character?

It’s hard. In the middle of every book I always have a moment where I think ‘why don’t I try and write something simpler next time?’ but ultimately I want to write books that I haven’t read before and that means trying to break away a little from the genre conventions. Some readers respond to that, others slam me for it. I’ve already had early reviews for Solomon saying they’re not sure what audience it’s aimed at because it contains a variety of different genre elements. For me that’s the point. I don’t see the benefit of staying inside the lines. Thriller readers are very sophisticated. They know the rules as well as we writers do. As a reader myself I like to be surprised and not know instinctively where something is going. So as a writer that’s what I try and do.

Having said that your other point is always first and foremost in my mind. I never try and lose pace at the expense of complexity or genre blurring. Each book goes through several drafts and each one is all about paring the story down until every storyline and every character is well-balanced, always developing, and always moving forward. Thrillers are like sharks, if they stop moving forward they die. I always spend a lot of time on the characters, all of them, not just the heroes. I think you need to care about everyone and everyone needs to feel real otherwise they’re not engaging. There’s an old joke about actors that if you asked someone playing a courtier in ‘Hamlet’ what the play was about they’d say ‘It’s about this courtier’. I think there’s some wisdom in that so I write each character as if the whole book is about them. Everyone has a yesterday and, hopefully, a tomorrow, even if they appear on just one page.

Are you allowed to give any clues about the next step in the Solomon Creed saga?

Probably not but I will anyway. In the first book Solomon knows nothing about himself. He only knows his name because it’s stitched into the label of his tailor-made suit jacket. At the end of the first book he has learned some things about himself but not enough. He figures the tailor who made his jacket must have measured him to make the suit so must know more about who he is. So he goes to France in search of him and finds more murder, mystery, and a shadowy legacy of the Nazi occupation.

Any writing habits or foibles?

I use my kids as a timing device. I drop them off at school then go and sit in a cafe and work until it’s time to pick them up again. I also try and write 1,000 words a day. These two things combined help focus the mind.

When not writing what kind of novels do you enjoy reading – and have there been any stand out reads for you this year so far?

I read all sorts, generally not thrillers though. Having said that I was one of the judges of a big US thriller prize earlier this year so read hundreds. Of those, my favourites were ‘Natchez Burning’ by Greg Iles, ‘The Fever’ by Megan Abbott, ‘Bad Country’ by CB Mackenzie. I also just read ‘The Son’ by Phillip Meyer – not a thriller but brilliantly written and just as compelling.

No, thank you. I was actually very nervous to see what you made of Solomon, being as you’re such a big Stephen King fan and all, so I’m delighted that you seemed to enjoy it so much.

A plane crash in the Arizona desert. An explosion that sets the world on fire. A damning pact to hide an appalling secret. And one man bound to expose the truth. He is Solomon Creed. No one knows what he is capable of.

When Solomon Creed flees the burning wreckage of a plane in the Arizona desert, seconds before an explosion sets the world alight, he is acting on instinct alone. He has no memory of his past, and no idea what his future holds. Running towards a nearby town, one name fires in his mind – James Coronado. Somehow, Solomon knows he must save this man. But how do you save a man who is already dead?

I’m not going to tell you much about Solomon Creed when it comes to plot to be honest. It’s one of those books that is best read cold once you have looked at the blurb and gone “ooh…rather fancy that one” which is what I did. And also I remembered that my utter  hatred of Religious conspiracy type novels was completely changed to  huge amounts of love by this authors Sanctus trilogy. I went back to despising them after that – obviously Mr Toyne has that X factor something.

Moving onto Solomon Creed then – the reading experience of it is something akin to being on a runaway train I imagine. It starts with a bang then off you go – no stopping, hang on for dear life and hope to holy heck that there is something soft to cushion the impact at the other end..

The thing about this book though is there is plenty of action, often quiet action,  but also a wonderfully perfect mix of drama and character study wrapped around the “Oh God” moments  – Solomon Creed is enigmatic and unknoweable even to himself. But slowly things start to come to light, although to say I’m now in a state of chronic impatience for book two would be putting it somewhat mildly.

I loved the clever writing, the delicate little touches that make this story into a legend waiting to happen –  There are gorgeous intricacies in the plot detail  and as things pan out it is highly addictive stuff – like you know, if you’d taken this away from me while I was still in the middle of it there would have been blood. And it wouldn’t have been fictional.

Clever intuitive storytelling. I rather adored it. Certainly I would highly recommend it. And then some. 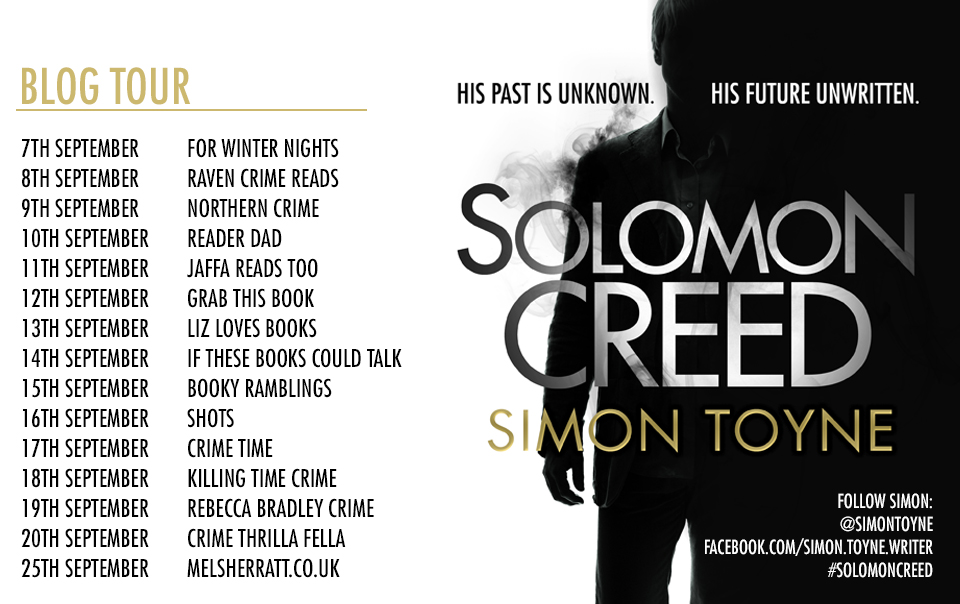