Spoonbenders – An Interview with Daryl Gregory 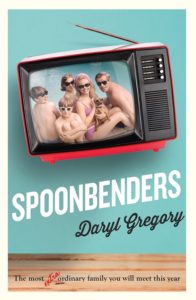 Today I am very happy to have a chat to Daryl Gregory, author of the amazing Spoonbenders – one of the best books I’ve read this year. When asking the questions I was only partway through but I was already immersed into the world of the Telemachus family. You should go meet them too. Short sharp review after the short sharp interview…

So at the point I’m writing these questions I’m about half way through the book and I’m loving every single minute of it – definitely going to be one of my books of the year – so perhaps you could tell me just a little about the family you created here and where the inspiration for them came from. I always love to hear about the inspirations!

Thanks for the kind words! I hope you dig the rest.

As you know from the opening chapters, the book is about the “Amazing Telemachus Family”—at least, that was their showbiz name when they travelled the country in the 1970s performing psychic feats. Teddy Telemachus, the patriarch of the family, is just a conman and a cardsharp, but his wife Maureen is a genuine clairvoyant. The kids have their own powers. The eldest, Irene, is the human lie detector; Frankie can move objects with his mind (except when he’s nervous); and Buddy can see the future.

But in 1995, twenty years after Maureen’s death, the family is in disarray. Frankie’s in debt to the mob, old CIA agents are sniffing around, and all of them are struggling to find love. The book opens when fourteen-year-old Matty, Irene’s son, accidentally has an out-of-body experience, which raises the possibility that the Telemachus family might be amazing again.

My inspiration came from, as always, books and life. I love the sprawling family stories of John Irving, such as The Hotel New Hampshire, and John Crowley’s magical family in Little, Big. But I was also thinking of my friends’ families in Chicago. My family was quiet and boring, but I’d have sleepovers at my friends’ houses, and there would be yelling and loud laughter and slamming of doors—so much drama! I was jealous. This book was my way of getting into one of those families.

I am currently especially taken with Matty – who is undergoing something of a revelatory experience about his relatives whilst dealing with his own sudden awakening – despite the more fantastical elements of Spoonbenders, it is also a realistically portrayed family drama. How hard was it to walk that line?

I love psychological realism in the face of surrealism. When far-fetched things are happening—Matty moving outside his body, say, or his Uncle Buddy glimpsing a doom-filled future—it’s doubly important for the characters to behave as real people would. The heart of the story has to be true, and there can be no genre shortcuts—characters acting a certain way because they somehow know what kind of story they’re in. If readers don’t believe in your characters, they won’t follow them when the going gets weird.

Who is YOUR favourite Telemachus and which character caused you grief during the writing (I know there is always one!)

You’re not supposed to love one of your children more than the others! My job was to fall in love with each member of the family, and to write each of them as if they were the hero of the story (because of course they are the heroes of their own stories). I love Teddy’s charm and nostalgia for the past, Irene’s yearning for love, Matty’s anxiety, and Buddy’s fortitude despite his broken heart. Each family member gets to tell their story—the point of view rotates through them—and I had to find each of their voices.

Buddy’s voice was the most difficult to find, until I realized that because he’s a bit lost in time—he remembers the future as well as the past, and every day it’s a struggle to locate the “now” in the timestream—then of course he would speak always in present tense. It’s always now. Once I realized that, I could hear him clearly.

I do have to admit that Frankie was my favorite to write, because he’s the most desperate member of the family, yearning for the big score, and wildly compensating with a grandiose presentation. In short, he’s the funniest. His rambling, self-justifying monologues (with Matty as his captive audience) were some of my favorite passages to write. He loves his family, and is desperate to win their approval, but he keeps getting in his own way.

Finally, a question I ask everyone – do you have a book you have read this year that you’d like to recommend to everyone?

The most enjoyable book I read this year was Lovecraft Country by Matt Ruff. It’s another multigenerational family story (I’m a sucker for those, obviously), about a Black family in 1950s America. They’re smart, talented, and magically gifted, but the supernatural horrors they fight are not as scary as the racist cops and oppressive culture of Jim Crow America. It’s thrilling, fun, and moving.

Spoonbenders by Daryl Gregory is out now and published by Riverrun

The Telemachus family is known for performing inexplicable feats on talk shows and late-night television. Teddy, a master conman, heads up a clan who possess gifts he only fakes: there’s Maureen, who can astral project; Irene, the human lie detector; Frankie, gifted with telekinesis; and Buddy, the clairvoyant. But when, one night, the magic fails to materialize, the family withdraws to Chicago where they live in shame for years. Until: As they find themselves facing a troika of threats (CIA, mafia, unrelenting skeptic), Matty, grandson of the family patriarch, discovers a bit of the old Telemachus magic in himself. Now, they must put past obstacles behind them and unite like never before. But will it be enough to bring The Amazing Telemachus Family back to its amazing life?

Spoonbenders is a miraculously readable speculative family drama featuring the Amazing Telemachus family – who are all actually amazing but not for the obvious reasons – this is a novel you sink into. It is strongly character lead with some beautiful plotting and a huge addictive quality as we go from one family member to the next, discovering their story and that of those around them.

Entirely entertaining and eccentrically intricate, this is a quirky, non conformist, rush of a literary read that as a reader you engage with entirely – using flashbacks to flesh out the history and their current status to show you where that history took them, putting a beautifully placed little twist on the end, this is storytelling at its best. Covering generations, a sprawling joy of a read first page to last, I am in love with this book and with this family. 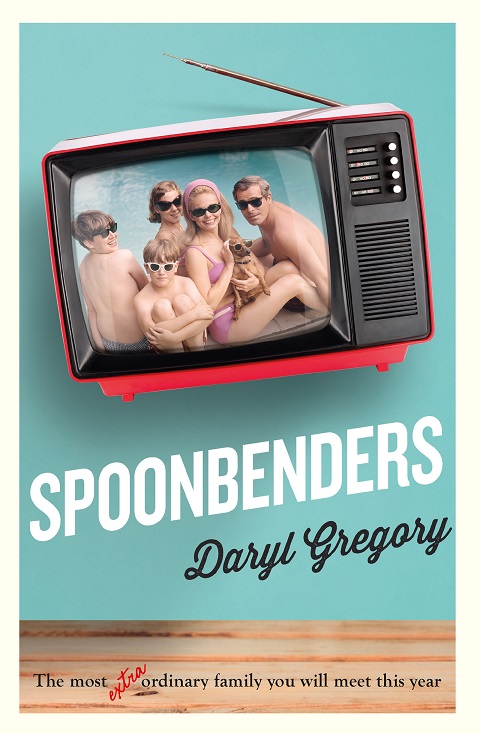