Spotlight 2015 – The Defence by Steve Cavanagh 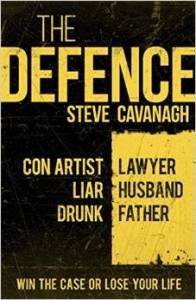 The truth has no place in a courtroom. The truth doesn’t matter in a trial. The only thing that matters is what the prosecution can prove. Eddie Flynn used to be a con artist. Then he became a lawyer. Turned out the two weren’t that different. It’s been over a year since Eddie vowed never to set foot in a courtroom again. But now he doesn’t have a choice. Olek Volchek, the infamous head of the Russian mafia in New York, has strapped a bomb to Eddie’s back and kidnapped his ten-year-old daughter Amy. Eddie only has 48 hours to defend Volchek in an impossible murder trial – and win – if wants to save his daughter. Under the scrutiny of the media and the FBI, Eddie must use his razor-sharp wit and every con-artist trick in the book to defend his ‘client’ and ensure Amy’s safety. With the timer on his back ticking away, can Eddie convince the jury of the impossible? Lose this case and he loses everything.

Ok so The Defence then. Another book I have been very lucky to get my hands on ever so early, but I can promise you it is definitely worth the wait ESPECIALLY if, like me, you have been pretty starved lately of a good courtroom drama.

With “The Defence” Steve Cavanagh manages to pull off not only a terrific courtroom drama, but also a bit of an edge of the seat thriller, some witty and darkly humerous moments and a character you will fall in love with.

Eddit Flynn is a mess and at first glance you would think that, if put in the situation he actually does find himself in, that he would be pretty useless. But Eddie is not exactly what he appears – his unusual upbringing means he has more strings to his bow than would be immediately obvious and as he sets off to extricate himself from a sticky situation and ensure his daughters safety it is glorious page turning reading joy.

The plot is intelligently drawn and oh so addictive, even without a main protagonist like Eddie it would be pretty darn good, with him its a marvel. There are some thrills and spills, some hilarious “set pieces” if you like, some witty banter and some seriously gripping moments where you might even decide to shout some encouragement, scaring anyone who might be around you. I love those types of books, the ones that get your blood up and then make you giggle. There is also an emotional edge to things, a child in peril and the relationship described between Eddie and his daughter is terrifically done so you can feel his terror at the same time as he is making you smile.

The villains are realistically villainous, I kind of liked Volchek in a funny kind of way, there are some great peripheral characters that I hope to learn more about in future stories and I really did enjoy every last minute of this. As I said, you may yourself need defending if anyone interrupts you when you are reading.

Overall then a top notch read, one you definitely need to look out for next  year, as for me I just want the next book now. Eddie will surely return and I, for one, can’t wait.