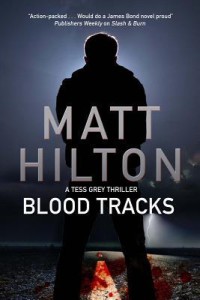 Very happy to welcome Matt Hilton to the blog today talking about his new series – Blood Tracks kicks off the Tess Grey thrillers and is a great book (already a  Joe Hunter fan here, if you haven’t read those and are a fan of the genre you should certainly take a look)

I’m a huge fan of the Joe Hunter series – tell us what inspired you to start a new series, something a little different.

To date I’ve written 11 books in the Joe Hunter series, plus a bunch of ebook exclusive short stories, since 2008, so you could say that I’ve kind of had Hunter on the brain quite a lot. But like most authors, I have other stories to tell, and some of them don’t fit in the Joe Hunter style. The Hunter books are typically fast-moving action thrillers, and for some time now I’d been thinking of stretching my literal wings to try something slightly different, putting more of an emphasis on the mystery elements of the plots. In the past I’ve pitched other books to my publishers, but have been warned off changing genres to avoid “reader confusion” – I’ve still written those books but have self-published them under my own imprint – so knew I had to do something similar but different. Occasionally my Hunter books have been wrongly described as “Men’s adventure novels”, and because of this I believe I’ve missed out on hooking as many female readers as I possibly could have. So, when I sat down to come up with an idea for a new series my first impulse was to write a female lead, and I immediately knew that she could not simply be a female version of Joe Hunter. In fact, I wanted Tess Grey to be at the opposite end of the spectrum: Hunter is a lawless vigilante with elite skills, whereas I decided that Tess should be an ex-cop, carrying a debilitating injury that has slowed her down and left her with emotional baggage to contend with, then throughout the course of the book show her coming to terms with her weaknesses as and developing into a strong, intelligent woman. I then decided I’d throw Tess into similar situations as I’d normally place Hunter and see how she would contend with them in her own way. I knew though that I’d need a foil, to allow certain actions to occur in the books without the constraints that Tess places on herself, so gave her a shaky partnership with Nicolas “Po” Villere, an ex-con from Louisiana. Through the old “opposites attract” idea, I thought it would cause a nice love/hate dynamic between the two, that would keep readers entertained, while also delivering similar thrills my readers had come to expect from my other books.

Talk a little about your two main characters, Tess and “Po” – how you saw their dynamic developing and whether things changed during the writing.

Tess Grey, despite the misgivings of her mother, followed the male family tradition of serving in law enforcement, but it all ended badly for her when she accidently killed an innocent man, and was severely injured during a robbery. Maligned by the media, she left the Sheriff’s Department (in Portland, Maine), and is making ends meet as a genealogist and low end private investigator when we first meet her in Blood Tracks. She has feelings of insecurity and failure hanging over her, but can’t turn down the offer of a job working on behalf of her local District Attorney’s office to trace a witness of a serious crime, but feels she will be seriously out of her depth when discovering the witness has fled to the bayous of Louisiana. Therefore she hires the services of Nicolas Villere, who relocated to Maine many years before. Nicolas is known as “Po” to his friends, a shortened nickname derived from “Po’boy”. He left Louisiana after serving thirteen years in the high security Angola Prison, also known as The Farm. But although Po is a convicted and time-served killer, conversely he is not a bad man. He served time after killing the murderer of his father, and then left home to avoid a continuing blood feud with the killer’s family. At first their relationship is a spiky one, and they both find it difficult coming to terms with each other’s methods, but their bond, and admiration for each other begins to grow as they both begin finding their way back to the kind of people they should have always been. I’ve always enjoyed books or movies where the lead characters bicker and fight, but learn that not only do they need their partner but they come to love and respect their differences too, and that was what I aimed for with Tess and Po’s relationship – hopefully I’ve pulled it off. Throughout the writing of the first book I never lost sight of the dynamic I wanted to play out between them, while contending with life threatening situations, so things didn’t really change in my mind. By the end of the book, I hope that Tess and Po have successfully gone through the changes to appease readers who will accept them as a solid pairing despite their shaky start.

There is a great mix of action and drama – how difficult is it to keep the balance and also, which parts do you enjoy writing most?

I think in any good action book you need a hefty dose of drama through which you come to know and understand the motivations of the characters, in order that the reader grows to like and care for them. Having written a bunch of Hunter novels, I’ve been able to ingratiate him with my regular readers, and have drip fed information about him throughout the span of around a million words or so, but with Tess and Po I knew I needed to establish their histories much earlier on, to show what they were and how they needed to change, and the best way I saw to do that was through the drama played out via their burgeoning relationship. It was great fun writing the action scenes, it’s kind of my forte, but also my bread and butter, but equally enjoyable, and for different reasons, I loved writing the parlay between Tess and Po, through which I was able to inject some much needed humour and emotion into an otherwise pitch-black scenario. I hope that the depth of the book satisfies readers who demand more from their action heroes than a continuous stream of high-jinx.

And one thing I have to ask…will Pinky make a return? Great character. They all were.

Pinky Leclerc began as a throwaway character in my mind, an old friend and contact of Po’s down in the bayous, but as soon as he made his appearance on the page he was fully formed in my mind and I couldn’t let him go, so I fleshed out his involvement in the tale and even had to rein him in at times. He’s an oddly endearing character, flamboyant, camp, and dangerous, with a very strange speech pattern. I’m thinking of trademarking the term “Pinky Me”, because that’s mostly who readers want to know more about. Of course Pinky will be back – I’m not sure the series would be the same without him.

Finally tell us a little about how you see the series developing and what is next for you?

Would you believe that this very morning I’ve just sent off the completed second novel in the Tess and Po series (or should that be Tess, Po and Pinky?) to my agent? It’s tentatively tilted “Painted Skins”, though that might change before publication, and picks up a few months after the events in Blood Tracks. In this one we find Tess investigating the disappearance of a young woman, who she comes to discover is in far more peril than from the men she first runs from. Again, I’ve mixed drama with action, and hope that the series continues to enthral readers, and grows from strength to strength. There’s so much more I have in mind for Tess and Po down the line, and might have hinted at a future direction I want to take the story arc in. For my Joe Hunter readers, fear not. Joe Hunter 11 – No Safe Place – is also written and I’m awaiting publication details on that one. I intend continuing to write Joe Hunter and Tess and Po books, and who knows, maybe somewhere down the line – if there’s enough demand – they might just bump into each other.

Thank you, Liz, it was my very great pleasure.

When her local District Attorney offers her a considerable sum of money to track down state witness Crawford Wynne, private investigator Tess Grey is in no position to refuse. Wynne is one of the few men still alive who can help the State nail vicious drug lord Alberto Suarez. But Tess is not the only one trying to track Wynne down. Suarez s psychotic brother Hector has been hunting and butchering anyone who is a danger to his brother.
Tess needs help and there s only one man she can turn to: Southern renegade ex-con Nicolas Villere, known to all as Po. Po always gets his man, but he has never been teamed with a woman before. Both have their own agenda for taking on this case, and neither fully trusts the other. But of one thing they are sure: if they don t cover each other s backs, they are both going to die.

Blood  Tracks has that same addictive quality I’ve come to expect from this author – with thrills and spills, edge of the seat action and the rest, but also has a quieter quality to portions of the tale in which the relationship developing between Tess and Po is developed and its entirely possible these two may become one of my favourite duo’s.

Matt Hilton has always had a sharp eye to characterisation, not letting it get lost amongst the more full on portions of his books – but it was interesting to see him write a female lead, pulling it off with some intuitive sense and making her beautifully realistic. An interesting and slightly different dynamic to the main protagonists, this was beautifully drawn.

Its a great mix – I’ll admit to being wary – when you love a series and the writer of that series then offers something new, that fear of change can kick in and things might work out well or they might not. In the case of Blood Tracks it worked out VERY well. I’ll be following this series as avidly as I follow Hunter – and if you are new to Matt Hilton’s writing, hey perfect opportunity to jump in right here. Definitely recommended.

You can find out more right HERE